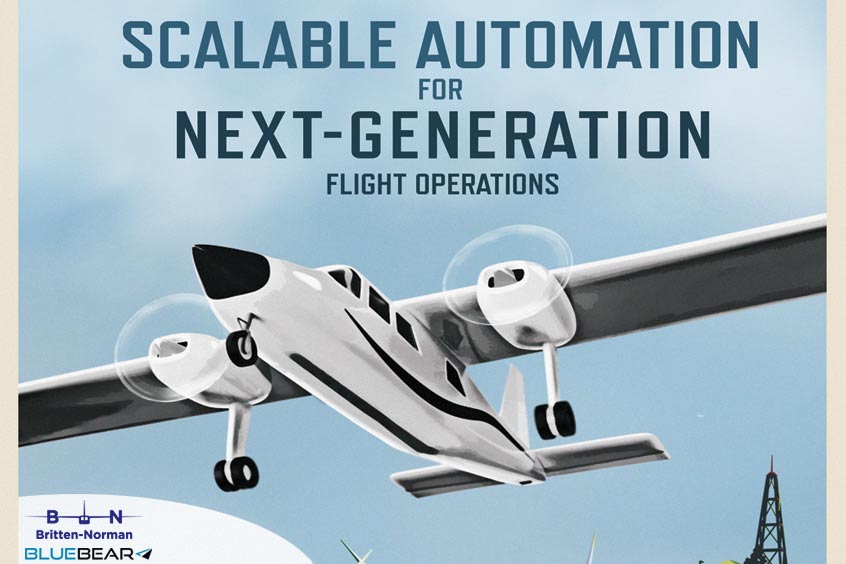 Britten-Norman and Blue Bear, have partnered to make autonomous flight a reality by the mid 2020’s. (Photo: Britten-Norman)

British SME's, Britten-Norman and Blue Bear, have announced they will partner to make autonomous flight a reality by the mid 2020s.

Britten-Norman is the UK's only sovereign commercial aircraft manufacturer. It has designed and produced aircraft for over 60 years. Its most famous platform, the Islander, is one of the world's most successful and enduring aircraft designs. Known as a rugged workhorse, the aircraft serves in a variety of roles from passenger and cargo transport to medevac and search & rescue. It's adaptability, as well as short take-off and landing abilities, has made it the backbone of communities around the world.

Starting in October 2020, Blue Bear and Britten-Norman will work together to automate the operation of a Britten-Norman Islander. The project's first milestone will be to demonstrate single pilot operations with an autonomous co-pilot providing assistance. This is expected to enter service in the mid 2020s and would present a significant efficiency increase and cost saving for regional air operators.

Critical to the UK's levelling up agenda will be improving transport links between the UK's regions and cities. Currently regional air transport is underdeveloped and often forced to rely on subsidy. This is because regional air transport can struggle to be economically sustainable due to high operating and maintenance costs. Regional air transport will have to incorporate zero carbon and autonomous technology to make operations affordable and scalable. Utilising these technologies could make air transport faster, greener and easier than road and rail journeys by the 2030s.

To celebrate the announcement the companies have released an image designed to echo early travel posters. As a young sector, aviation companies used visually striking images to alert the public to how aircraft changed lives. Both companies felt that now, with radical new capabilities on the cusp of being realised, an update was in order.

Dr Yoge Patel, CEO of Blue Bear, said: "Blue Bear are absolutely delighted to be working with Britten-Norman, whose talent for rapidly turning new challenges into solutions for their customers is remarkable. We have found a kindred spirit, in so many aspects, with whom the next era of aviation can be genuinely realised. It's a perfect match. Two agile SMEs with their own dedicated systems integration and flight test facilities can de-risk and flight prove innovations at an unprecedented pace".

William Hynett, CEO of Britten-Norman, said: "We have become used to the 'car of the future' incorporating green and autonomous technology, the future of aviation will undergo a similar revolution. Blue Bear is the leading light when it comes to air autonomy technology, it is an absolute privilege to be partnering on this project. The whole Britten-Norman team is very excited. Blue Bear and Britten-Norman share the same values and an ethos of passion for innovation. We are proud to be British SMEs partnering to build the future of British aviation. I look forward to our companies achieving great developments together."