With Crouzet, Volocopter is designing the air taxi for the cities of tomorrow 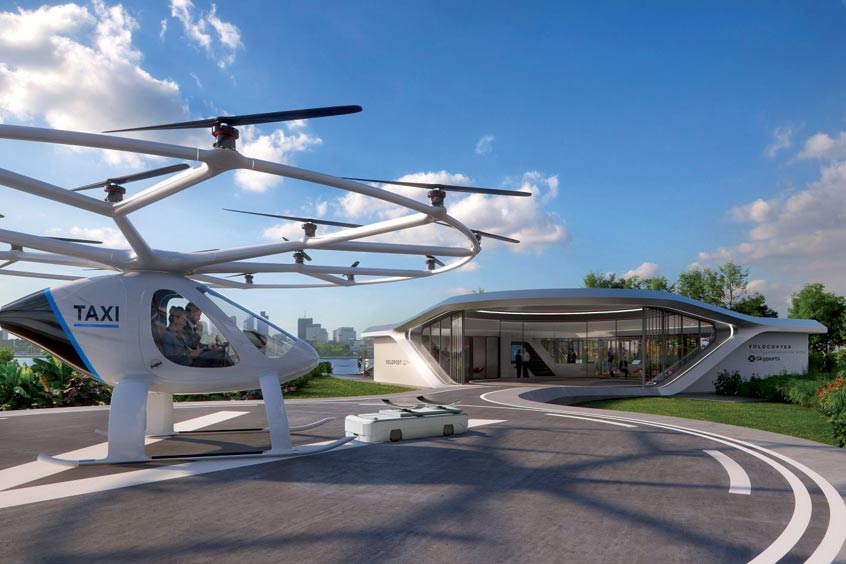 VoloCity, the Germany-based Volocopter's urban air taxi, will incorporate three Crouzet-supplied components. Looking ahead to its scheduled 2023 commissioning, we want to examine this project and the technological partnership between the two companies.

"At Volocopter, we always refer to Crouzet internally as a partner, not just a supplier", VoloCity's Chief Engineer, Pierre-Bertrand Lancelevee, perfectly sums up the existing collaborative spirit between Volocopter and Crouzet for this electrifying urban air taxi project.

This engineer is particularly well suited to gauge this partnership. And with good reason: he initiated it! "I worked for over 10 years for Airbus Helicopters in Marignane, in the south of France. Back then I was able to see the technological excellence of Crouzet for myself, particularly regarding electrical circuit breakers. When we began screening potential suppliers for VoloCity, Crouzet seemed an ideal candidate to supply certain components. The French group had considerable advantages in terms of both technical resources and engineering expertise".

We are in March 2020. Both the concept and architecture of the future air taxi are set.

The prospective VoloCity will be quiet, electric, and capable of carrying two passengers on short trips (roughly 30 km) over the world's major cities. At this stage, Volocopter's teams are working on identifying and integrating the right components, compatible with their requirements for reliability, simplicity, and cost. Crouzet is competing against other top names in the sector, notably for the supply of one specific component: the circuit breaker panel.

"From our very first discussions, the Volocopter teams clearly explained their certification requirements," recalls Dominique Meux, head of the Aerospace & Defence offer at Crouzet. "We therefore proposed robust solutions with maximum redundancy to meet these certification requirements. This element made all the difference. I should also mention our perfect knowledge of our components, enabling us to offer a competitive price for equipment with an elevated level of safety and reliability". Coordinated by Crouzet Business Development and R&D teams, the French response will finally allow three of the company's components to be installed aboard the VoloCity: not only a circuit breaker panel (which is unique for having no cables), but also a control stick, and finally a rescue box (permitting control over the device should the control stick fails).

Trust and proximity between teams

When describing the strengths of their Drome-based partner, Pierre-Bertrand Lancelevee praised the agility and responsiveness of Crouzet's teams, even when facing a tight schedule and disruptions caused by the pandemic. "Other major aerospace groups could certainly have offered us equally relevant technical solutions. However, I doubt that they could have given us the same level of interaction as Crouzet. We had weekly contact with their teams in charge of the different components. Our counterparts fully understood our objectives and succeeded in harmonising their technical responses to our requirements and constraints. This closeness will continue in the forthcoming stages of the urban taxi's lifespan: certification phase (late 2022), commissioning (2023), industrialisation...

Even ahead of VoloCity's certification, several cities worldwide have already confirmed their interest in hosting the future urban taxi to fly over their territories. VoloCity's first commercial flight in France is slated for 2023 in the run-up to the Olympic Games. While we cannot predict which of the two nations will win more medals, we do know that France and Germany will both stand tall at the top of the podium in terms of aeronautics.

Brief overview of the VoloCity project:

Pierre-Bertrand Lancelevee – Volocopter, Chief Engineer VoloCity, "I have very fond memories of my first visit to Valence to present the VoloCity concept to the Crouzet teams. I was worried that I would not be taken seriously with this project, which directly challenges aviation codes. Yet, it was just the opposite! Not only did they listen attentively to my presentation, but I also received confirmation of Crouzet's interest in actively engaging with us one week after the visit."

Benoit Secher – Crouzet, Communication Director, "Contrary to popular belief, air taxis are no longer relegated to science fiction. It is now a promising market that is emerging all over the world! It is therefore a great source of pride for Crouzet to be part of manufacturing one of the pioneering models of this type of vehicle. Through this partnership with Volocopter, we are demonstrating our involvement in highly innovative solutions that will shape the future of aeronautics. "