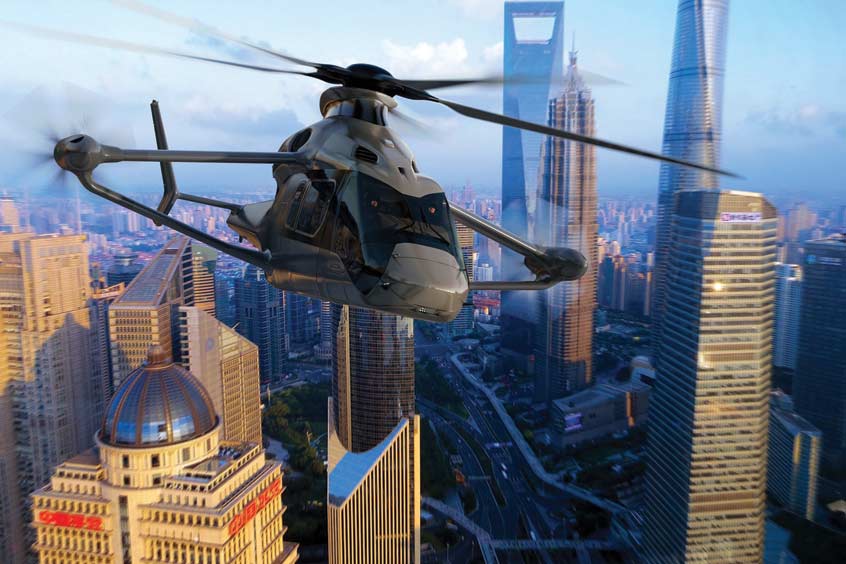 The assembly of the Racer high-speed demonstrator has begun. (Photo Airbus) 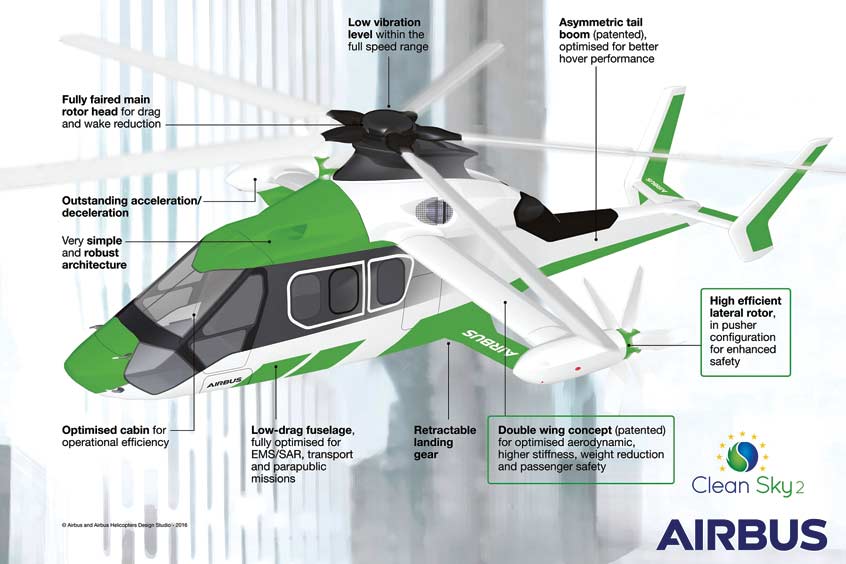 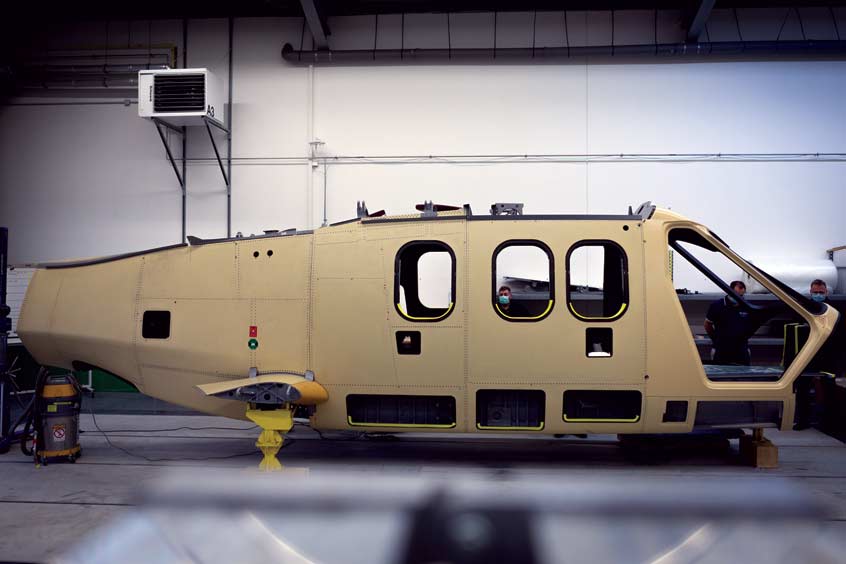 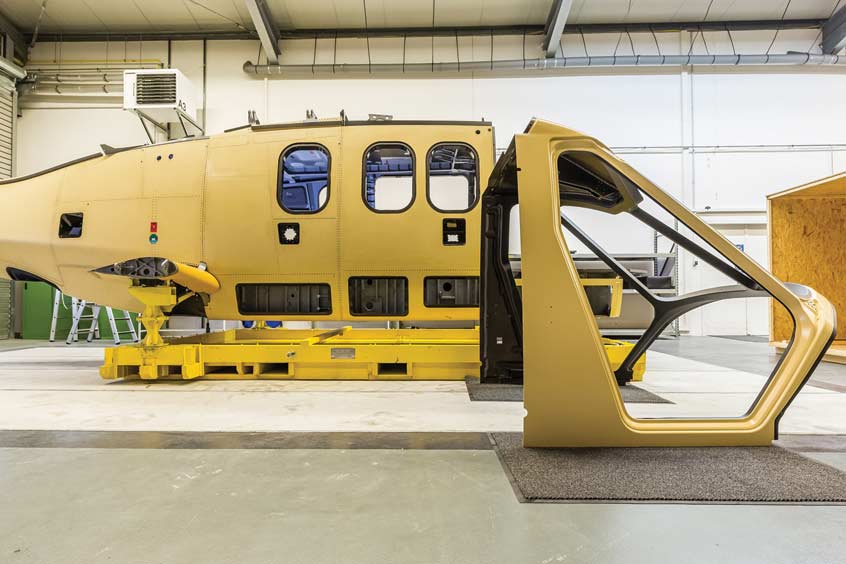 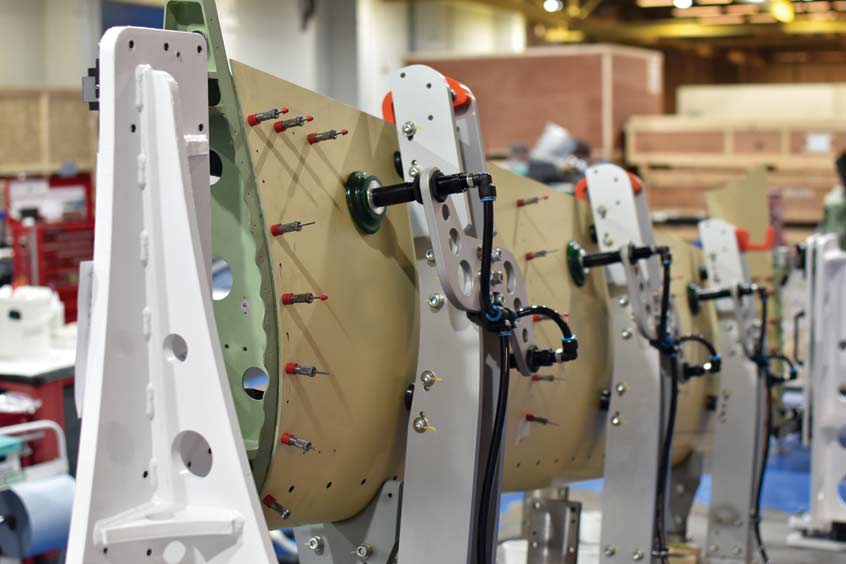 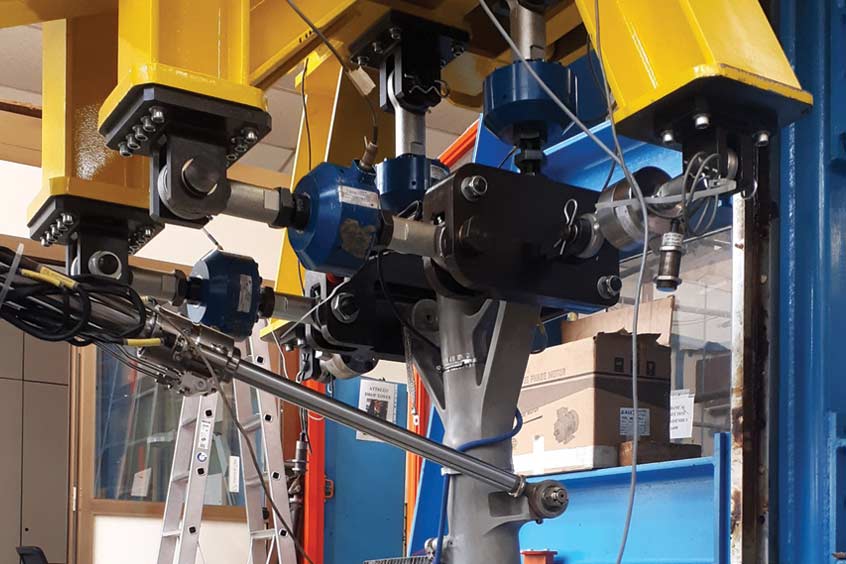 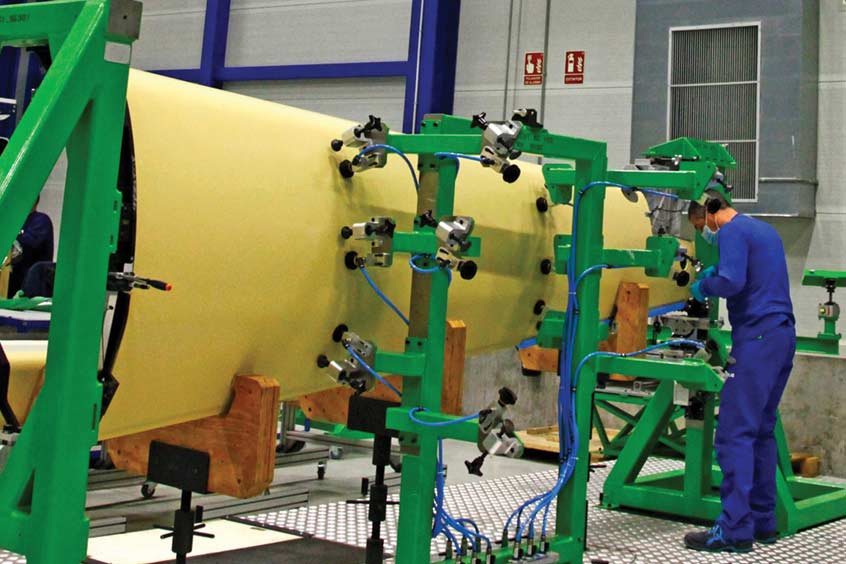 The Racer programme is one of Airbus Helicopters most exciting innovation projects and one that illustrates the company's approach to innovation, which is focused on delivering value to customers and lowering helicopter emissions.

Developed in the frame of the European Research Clean Sky 2 project, which involves 40 partners in 13 European countries, the high-speed demonstrator will be optimised for a cruise speed of more than 400 km/h (the average helicopter can reach a top speed of about 260 km/h) and aims at achieving the best trade-off between speed, cost-efficiency and mission performance. Fuel savings will be generated thanks to the innovative Safran eco-mode hybrid-electrical system, which allows one of the two Aneto-1X engines to be shut down while in cruise flight. The particular architecture of the Racer formula will also contribute to lowering its operational acoustic footprint.

Unveiled at the Paris Air Show in 2017, the Racer demonstrator passed its critical design review in 2019 before the manufacturing of some long lead items was achieved in 2020. The recent completion of the demonstrator's centre fuselage represents a decisive milestone for the programme as it marks the start of the Racer's assembly.

This first assembly phase is taking place at Airbus Helicopters' site in Donauworth, Germany and will involve the installation of several major components such as the canopy, the box-wings, the fuel system, the cowlings, and more. Later this year, the Racer will be transferred to Airbus Helicopters' site in Marignane, France for the final assembly and subsequent launch of the flight campaign in 2022.

Here is a "sneak peek" at some of the Racer's major components that will soon be assembled:

The central fuselage: Designed and manufactured by Romania's RoRCraft consortium, formed by INCAS (the National Institute for Aerospace Research "Elia Cafaroli") and the aerospace company ROMAERO, the Racer lightweight airframe is a major achievement for the teams. This is the first time such an advanced hybrid helicopter structure, incorporating both metallic and composite primary structural elements, has been produced in Romania. The RoRCraft consortium will also be contributing to the demonstrator flight clearance by designing and conducting ground tests and stress analysis of the required fuselage parts.

The side shells: Made of carbon fibre reinforced plastic (CFRP), the 3.4 x 1.5 metre cover for the Racer's side panels connects the tail boom to the aircraft's cockpit. Such large format CFRP shells are traditionally made manually, but the Racer's shell components have been manufactured in a highly automated process thanks to a new method developed by a research team from the Fraunhofer Institute for Foundry, Composite and Processing Technology IGCV in Germany.

This team has also conducted the mechanical tests of the material combination and new manufacturing process required to receive flight authorisation. The intermediate side shells have already been assembled on the Racer airframe by Romania's RoRCraft consortium.

The canopy: Developed by the German FastCan consortium, formed by KLK Motorsport GMBH and Modell und Formenbau Blasius Gerg GmbH, the Racer's innovative carbon fibre canopy is a good example of the synergies between the automotive and aerospace industries. The FastCan consortium has leveraged the automotive design expertise and manufacturing technologies to create a lightweight canopy, which is optimised for low aerodynamic draft and a good field of view. The Racer canopy will integrate lightweight, erosion-resistant windows and windshields capable of withstanding bird strikes, even at high speeds, and were developed by the WIMPER consortium, which comprises the KRD Sicherheitstechnik GmbH, the German Aerospace Center DLR, the Institute of Structures and Design, and the Stuttgart University's Institute of Aircraft Design.

The fuel system: The Racer's fuel system design and manufacturing is the result of a collaboration between the ActionRcraft consortium, composed of Safran Aerosystems, which is in charge of the fuel storage, and the StrongCraft consortium, formed by Safran Aerosystems, Secondo Mona and the Netherlands Aerospace Center, responsible for the fuel distribution, gauging and ventilation systems. Starting from a classical fuel system design, the main challenge was to adapt it to the demonstrator's new capabilities in terms of speed, acceleration, and climb and descent rates. The fuel system will continue being put to the test during the coming ground and flight tests in order to ensure its performance. The Racer's fuel system has been designed with a lightweight tank bladder material and a new optical sensor is under development to be tested in the fuel bench in different conditions.

The wings: The British ASTRAL consortium, composed of AERNOVA Hamble Aerostructures and the Institute for Advanced Manufacturing at the University of Nottingham, are responsible for the design and manufacturing of the innovative Racer wings, one of the most striking elements of the demonstrator. Optimised for aerodynamic efficiency, the patented "double wing" or "box wing" provides lift in cruise mode while enhancing safety around the demonstrator during ground operations. With the aim to contribute to the lower emissions objective of the Clean Sky 2 programme, each new wing on the Racer has been designed with high-performance ecological materials that reduce the weight of the aircraft. The new wings actively enhance the helicopter's performance by providing additional vertical lift and the ability to fly further and faster than traditional helicopters.

The landing gear: The Racer's landing gear has been designed, manufactured and tested by the ANGELA consortium, formed by the Centro Italiano Ricerche Aerospaziali, Magnaghi Aeronautica and the Lithuanian-based Techno System Development. Integrated inside the wing and fuselage with a movable-door system, the landing gear was conceived to minimize drag when retracted. When extended, the system will provide a large track for a safe landing. The reference product of the Magnaghi Aeronautica group for more than eighty years, the landing gear system is currently undergoing all the tests required for the flight clearance at their test centre near Naples.

The rear fuselage: Based on an Airbus Helicopters patent, the Racer's rear fuselage is a major accomplishment for the Airbus Helicopters teams in Spain, which was supported by the Outcome consortium led by Aernnova. Its dimensions, weight target and its asymmetric cross-section profile all had to be designed to optimise the Racer's hover performance without penalizing the forward and cruise flights phases. Likewise, its atypical H-shaped empennage and double tilted vertical/horizontal stabiliser, devised to enhance stability and energy consumption, have also required the implementation of innovative technologies. The Racer will be the first Airbus aircraft to fly with a primary structure, produced using additive manufacturing.