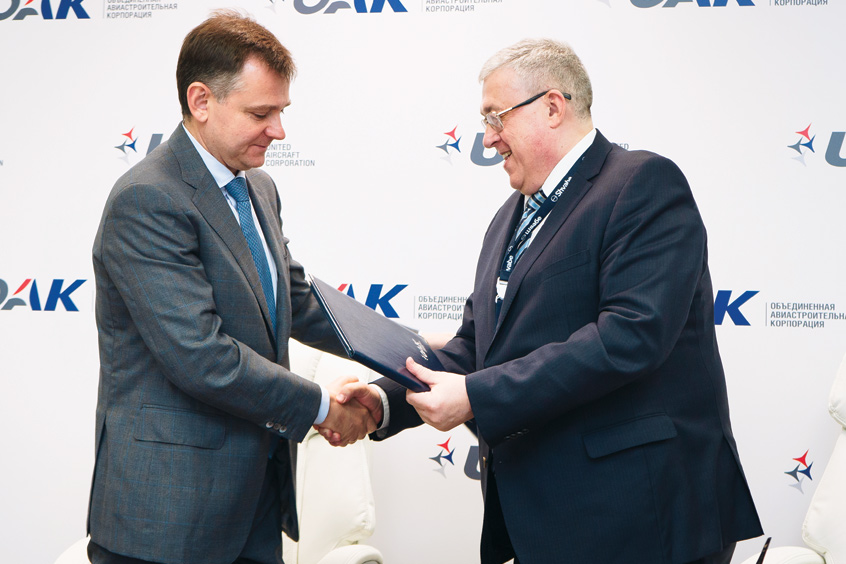 The General Director of UAC Yuri Slyusar and the head of the Shvabe holding Alexei Patrikeev signed the agreement within the framework of the MAKS-2021 business program. (Photo: United Aircraft Corporation)

The United Aircraft Corporation (UAC) and the Shvabe holding, which are part of Rostec State Corporation, have entered into an agreement to develop and supply a 24-hour optical-electronic sighting system KOEPS-75 for the newest Russian light tactical aircraft (LTS) Checkmate, presented at the International Aviation and Space Salon MAKS-2021.

The agreement was signed by the General Director of UAC Yuri Slyusar and the head of the Shvabe holding Alexei Patrikeev within the framework of the MAKS-2021 business program.

KOEPS-75 was developed by the Ural Optical and Mechanical Plant named after V.I. E.S. Yalamov (UOMZ) of the Shvabe holding. In accordance with the requirements of customers, KOEPS-75 in the basic version can be supplemented with landing and defense stations.

"The key factors in the successful completion of the task of equipping the new Russian fighter with optoelectronic equipment are the quality, economics and timing of work. The Shvabe holding possesses all the necessary competencies to solve the tasks set before us. We thank our colleagues from the UAC for their trust and for the fact that they have chosen us as executors, "said Alexei Patrikeev, a member of the Bureau of the Union of Mechanical Engineers of Russia.

"LTS Checkmate is an advanced aviation complex, which assumes maximum opportunities for adaptation to customer needs, minimum operating costs, and versatility. We will improve the characteristics of the aircraft, using the potential and developments of Shvabe and other co-operatives, while designing and creating blocks of a new aircraft in a short time and at a given cost of the product," said UAC General Director Yuri Slyusar.