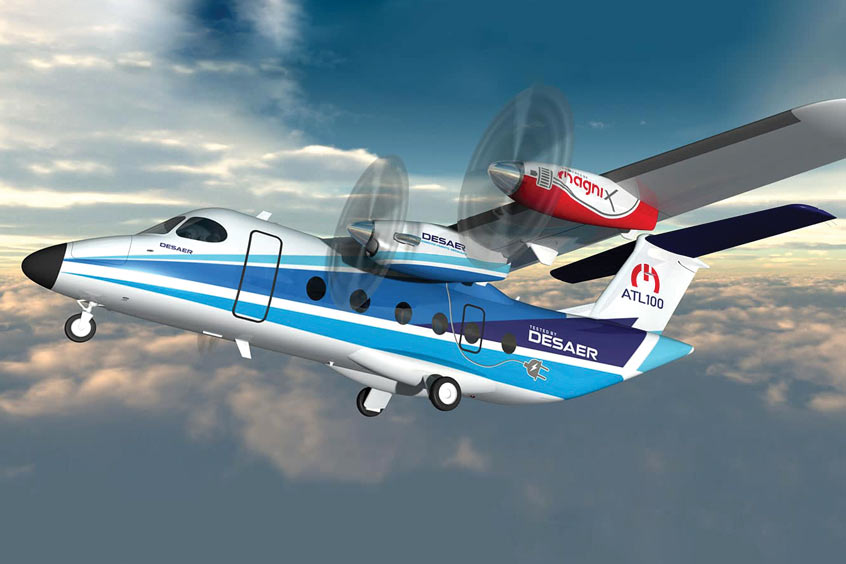 magniX announced a partnership with Brazilian aeronautical company, Desaer, to develop the ATL-100H, a hybrid electric iteration of the ATL-100 regional aircraft. The ATL-100H is expected to save between 25 - 40 percent of fuel depending on the range of the operation, a significant achievement in carbon emission reductions. The innovative design of the hybrid electric ATL-100H is a stepping stone towards an all-electric aircraft from Desaer, supporting the globally recognised need to accelerate sustainable aviation practices.

The original ATL-100 model is under development by Desaer and will be the first to enter into service. magniX's technology will be used to develop the ATL-100H, which will be powered by two magni350 electric propulsion units (EPUs) and two turboprop engines. The battery powered hybrid aircraft will utilise both an electric and gas motor, with the goal of achieving significant levels of fuel economy and carbon emission reduction without compromising performance and range required for regional aviation. The magnX electric propulsion system will reduce risk, operating costs and noise, while promoting increased efficiency.

"The implications of creating the hybrid electric ATL-100H are far reaching, and will have a positive impact on environmental sustainability and the aircraft's operational flexibility in the Brazil region," said Simon Roads, Head of Sales at magniX. "magniX is leading the way in electrifying the skies, and our partnership with Desaer will transform regional travel for passengers and cargo alike."

"The ATL-100H and future versions of the aircraft will enable customers and operators to achieve carbon emission reduction targets, while maintaining the low operating costs offered by Desaer's ATL family of aircraft," said Evandro Fileno, Desaer's CEO. "The ATL-100H will enable operators to connect more remote communities via aviation, opening up greater economic opportunities across Brazil."