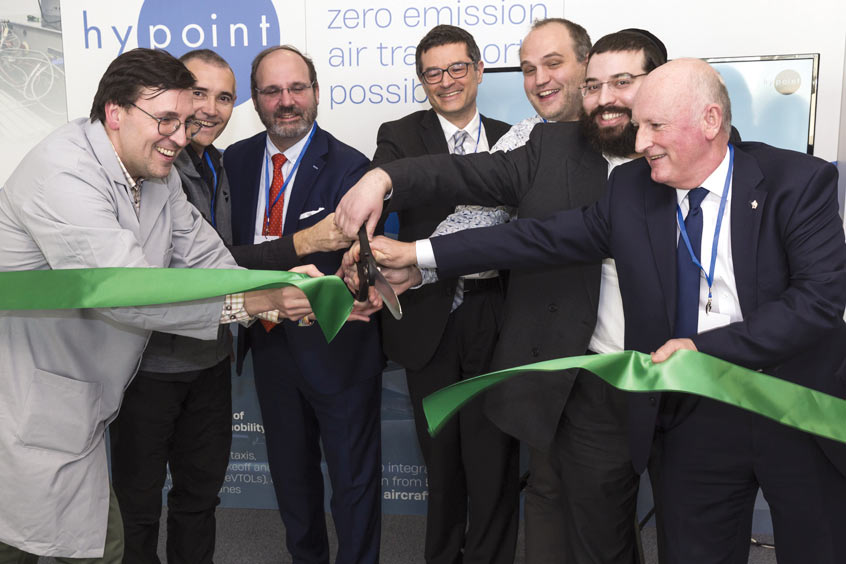 HyPoint will invest more than £11 million into its R&D and production site in Sandwich, Kent. (Photo: HyPoint)

Over the next two years, HyPoint will invest more than £11 million in Sandwich and grow headcount to more than 50 employees, a scheme that was recognised by 10 Downing Street at the Green Investment Summit in October 2021. By the end of 2025, the company expects to employ more than 100 workers and have 100 megawatts of onsite plant capacity.

"HyPoint is the kind of visionary tech company that we welcome. This Government is developing an ambitious Jet Zero Strategy, and we recognise the role that hydrogen could play in decarbonising the industry," said Transport Minister Trudy Harrison, who serves as Parliamentary Under Secretary of State at the Department for Transport. "This move is a strong vote of confidence in the UK and a major boost for green jobs in the local area."

"It is fantastic to see HyPoint opening the doors to its new Discovery Park in Sandwich. This location will help drive forward innovation in the technologies that could make zero-emission aviation a reality," said Industry Minister Lee Rowley, who serves as Parliamentary Under Secretary of State in the Department for Business, Energy and Industrial Strategy. "Not only is this facility a win for the UK aerospace sector, it is also a win for our plans to level up across the UK, and I look forward to seeing its footprint expand in the coming years."

"With its massive technical and academic talent pool, a globally recognised ecosystem of hydrogen manufacturers, and strong transport decarbonisation targets, the UK is well-positioned to become a global leader in the hydrogen economy," said Dr. Alex Ivanenko, HyPoint's founder and chief executive. "We are thrilled to bring our team and technology to the world-class Discovery Park science and innovation hub, which is already home to industry giants such as Pfizer. This location will enable us to accelerate the development and delivery of our hydrogen fuel cell technology to aviation and aeronautical companies in the UK and around the world. Our work is critical to unlocking faster decarbonisation of aviation and urban air mobility, whilst also creating economic activity and jobs across the country to support the long-term sustainability of the UK's aviation industry."

"HyPoint's anticipated £11 million investment is a welcome boost for East Kent jobs and growth," said Derek Murphy, Kent County Council Cabinet Member for Economic Development. "The decision to base a state-of-the-art R&D facility here is both a strong endorsement of KCC's long-term support for Discovery Park and an exciting development which puts Kent at the forefront of the global green transport revolution."

"Discovery Park has always sought to be home to companies tackling the biggest issues facing our global community. Harnessing hydrogen for aviation offers the potential to transform our economy and, at the same time, protect our environment by dramatically reducing CO2 emissions," said Mayer Schreiber, CEO of Discovery Park. "HyPoint's multi-million-pound arrival clearly demonstrates their confidence in Discovery Park as a home for world-leading industrial biotechnology delivered through global partnership and innovation."

HyPoint offers a clear pathway for decarbonisation of the aviation sector

Aviation produced 2.4% of global CO2 emissions in 2018, which as a country would rank it sixth in the world between Japan and Germany and represents a greater share of global CO2 emissions than the 136 lowest-polluting countries combined. Non-CO2 effects, such as warming induced by aircraft contrails and other pollutants, bring aviation's combined total contribution to global warming to approximately 5%. Because fossil fuel airplanes sold today are expected to be in operation for decades — and air transportation is expected to continually increase — aviation's contribution to climate change is expected to grow rapidly compared with other sectors that are already decarbonising. BloombergNEF projects that if nothing is done, annual aviation emissions will increase to 2.05 Gt in 2050 in a baseline scenario, a 92% increase from 2019.

HyPoint's NASA award-winning approach utilises compressed air for both cooling and oxygen supply to deliver a hydrogen fuel cell system that radically outperforms existing battery and hydrogen fuel cell alternatives. By utilising specialised high-temperature membranes and an industry-first air-cooling system, HyPoint is able to deliver unprecedented performance while reducing total system weight by more than 60%. Testing has shown that HyPoint's current system delivers 2,000 W/kg of specific power, more than triple the power-to-weight ratio of traditional liquid-cooled hydrogen fuel cells systems, and 1,500 Wh/kg of energy density, more than 7x the energy density of current battery systems. In October, HyPoint announced a partnership with BASF, the global chemical giant, to develop a cutting-edge hydrogen fuel cell membrane that will significantly increase HyPoint's system level power as well as increase its durability and operating temperature. The new system, available in 2025, will be able to deliver more than 3,000 W/kg of specific power — at least a 50% increase over the current system — which is enough to satisfy the requirements of narrow-body aircraft.

"ZeroAvia and HyPoint are aligned in our vision to fully decarbonise the aviation industry and supplant fossil fuel powertrains with zero-emission hydrogen-electric powertrains. ZeroAvia is doing most of its R&D activity for our 10-20 seat engines in the UK, and it's great to have a leading fuel cell developer such as HyPoint nearby," said Val Miftakhov, founder and CEO of ZeroAvia, who was also present at the ceremony. In 2020, ZeroAvia — which has offices in Kemble and London — became the first company to successfully complete a hydrogen-electric passenger aircraft flight. It has raised $115 million from investors that include United Airlines, Alaska Airlines, Amazon's Climate Pledge Fund, Breakthrough Energy Ventures (Bill Gates' fund), Shell, and others. "We continue to work closely with HyPoint to develop hydrogen fuel cells for future ZeroAvia power plants, and are looking forward to even closer collaboration going forward."

In August, HyPoint announced a partnership with Piasecki Aircraft to co-develop hydrogen fuel cell systems for eVTOL applications including its PA-890 Compound eVTOL Helicopter, which is expected to become the first hydrogen-powered manned helicopter when it is unveiled in 2025. "HyPoint is well-positioned to be the first company to bring to market hydrogen fuel cells that are uniquely designed for aircraft and aeronautical use," said John Piasecki, President and CEO of Piasecki, who was also in attendance. "We are excited for the HyPoint team and look forward to co-developing full-scale systems for zero-emission eVTOL flight."