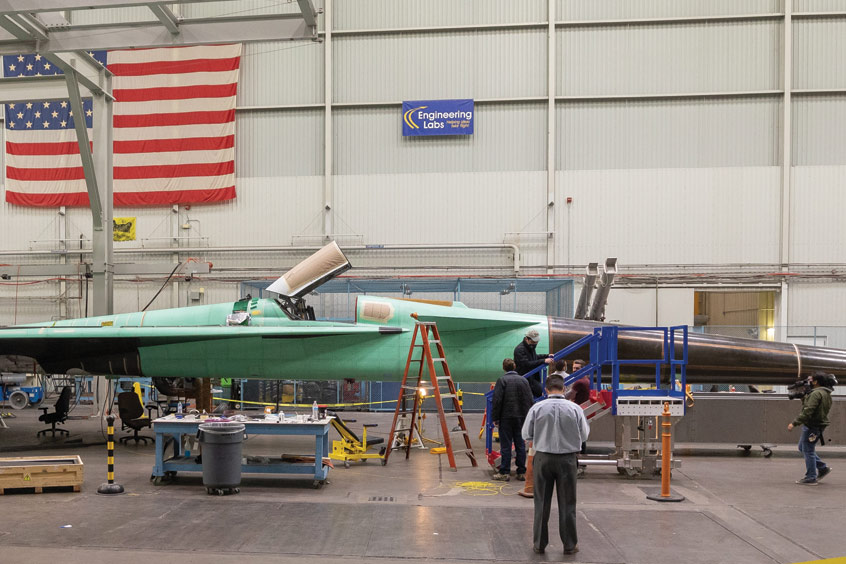 This panoramic side view of NASA’s X-59 Quiet SuperSonic Technology airplane shows the aircraft sitting on jacks at a Lockheed Martin test facility in Fort Worth, Texas. (Photo: Lockheed Martin)

It appears the road to enabling a future that includes convenient commercial supersonic air travel over land demands a substantial pit stop in Fort Worth, Texas.

Who knew? Aeronautical innovators at NASA and Lockheed Martin did. They have long planned for this milestone in assembling and testing the X-59 Quiet SuperSonic Technology (QueSST) airplane.

Although the X-59 QueSST is being built by Lockheed Martin at their Skunk Works facility in Palmdale, California, the airplane needed to be moved to another Lockheed facility in Texas for a series of important structural tests before returning it to the West Coast.

But let's back up a bit.

NASA's X-59 is a one-of-a-kind airplane designed to fly at supersonic speeds without making annoying, if not alarming, sonic booms below.

Instead, because of its unique shape, the X-59 is expected to produce quieter sonic "thumps" that can barely be heard on the ground – if at all.

Current rules prohibit aircraft from flying faster than the speed of sound over land. Those rules are based on speed, not noise. If the X-59 can publicly demonstrate that a plane can fly supersonic at an acceptable noise level, then those rules could be changed.

If that happens, NASA technology from the X-59 could be applied to new aircraft designs so commercial airlines might introduce faster-than-sound flights capable of speeding people coast-to-coast in half the time.

"That's what we're all working so hard to make possible," said Walter Silva, a senior research scientist at NASA's Langley Research Centre in Virginia. He is also NASA's structures lead for the X-59, so he is directly involved in the airplane's Texas visit.

Construction of the X-59 in California had made enough progress where all the major structural pieces – the wing, main body, tail, and nose – were assembled and power could be turned on to the vehicle for the first time.

The next major task was to make sure the airplane structure wouldn't break apart in flight when exposed to stresses small and extreme.

Mike Buonanno, a Lockheed Martin aerospace engineer who is the company's vehicle lead for the X-59, explained why wrapping up the X-59 and shipping it by truck to Texas in late December was the best way to prove that.

"Our Texas site has existing facilities to perform the kinds of tests needed. It would have been expensive and time consuming to design and build them from scratch in Palmdale. But in Fort Worth they've got the perfect facility with a full control room and all the support equipment needed to do those tests very efficiently," Buonanno said.

The company's Fort Worth facility is where the F-16 Fighting Falcon was built for many years. Test equipment still available needed some modifications to handle the X-59's longer nose compared to the F-16, but those changes didn't get in the way.

"Our folks in Fort Worth were able to hit the ground running from the moment the airplane arrived from Palmdale," Buonanno said.

NASA has three goals for the X-59's stay in Texas in terms of the structural proof tests.

"The first goal is to make sure that the airplane can handle the anticipated loads during flight," Silva said.

Loads, in this case, mean anything that would put pressure or stress on the aircraft's structure. Typically, these kinds of stresses come when the airplane experiences rough air, makes quick turns, and during landing – among others.

Since the airplane isn't actually flying, tests are done with the aircraft sitting on hydraulic jacks that are connected directly with the structure. Arms that press down on areas of the airplane, such as the top of the wing, also are used.

How much stress is too much? Buonanno explained the loads applied to the X-59 are 25 percent greater than any load the airplane was designed to ever see in actual flight.

Because the X-59 isn't a prototype for a series of aircraft, none of the tests are designed to see how much stress a part could take before it breaks. This type of "test to destruct" is seen only in large production runs where one airplane can be pulled away and sacrificed.

"In any case, there are all sorts of safety features built into the testing so that if anything we don't want happening is detected everything shuts off and the whole thing goes into a safe position," Silva said.

The second goal is to calibrate the sensors built into the X-59 that are designed to tell the pilot how much stress is being measured at that point on the airplane. This is done by comparing what the sensors say with the known amount of stress being applied during a test.

"The third goal is to take the data and compare it with the computer models we used in designing the airplane in the first place and make sure what we thought was going to happen turned out to be accurate and the airplane is built as designed," Silva said.

As of the last week of January about 80 percent of the structural tests were completed, and all is well.

"Everything is passing with flying colors, and nothing is bending in a way we didn't expect," Buonanno said.

Once all the structural tests are complete, the team – which includes NASA and Lockheed Martin representatives from Palmdale – will turn their attention to performing fuel tank calibration tests.

The X-59's gas tanks will be filled, and fuel-remaining sensors inside will be checked, not only with the airplane sitting level but with it pitched and rolled.

When that work is completed, the X-59 will be returned to Palmdale. The exact timing of that return remains unknown for now.

"We will be in Fort Worth as long as we need to be there, until we think the data is good, and everything has been performed to everyone's satisfaction." Silva said.

Once back in Palmdale, the X-59 will see the rest of its major systems and subsystems installed – its GE engine, landing gear, cockpit displays, etc. – with the hope of having it ready for first flight late this year.

When that happens, the world's focus will be on the California high desert where once again aviation history will be made.