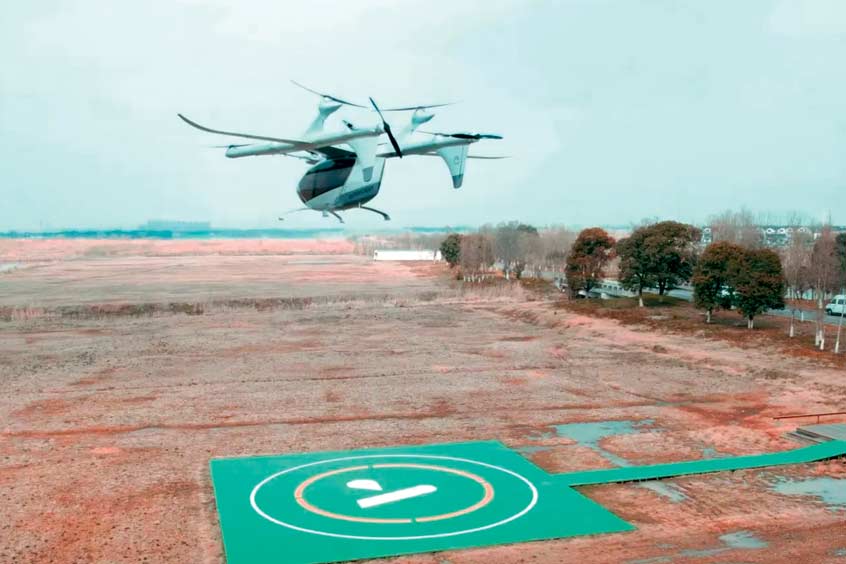 We would like to announce our first successful completion of the proof-of-concept, transition test flight for air taxi Prosperity I, in which the aircraft switches from a vertical take-off motion to the more energy-efficient, horizontal flight and back to vertical flight, before landing. The successful transition test flight was achieved in January 2022. The unmanned flight took place at Autoflight flight test area in JiangSu province, China with CEO Tian Yu, the R&D team and 40 AutoFlight staff present, and Prosperity I rose to an altitude of 150 metres at speeds of up to 123 mph.

Prosperity I was designed for short transfers between parts of a city, airport commutes, connecting two nearby cities or enabling trips to the countryside while avoiding traffic on the ground. When ready for commercial flight in 2025, it is expected that a trip that takes hours by car will be reduced to about 10 minutes with Prosperity I, without being any less safe or more expensive than a car taxi ride.

A 'transition' is when an aircraft moves from a vertical to horizontal motion and is one of the most challenging parts of an eVTOL flight. Vertical flight for the proof of concept for Prosperity I required eight rotors to lift the 3,307 pounds, including four-person, state-of-the-art electric aircraft into the air. Once the aircraft reached an altitude of 150 metres and the airspeed of 100-110mph the fixed wing part of the eVTOL generated lift.

At this point, Prosperity I entered the complex transition phase – the rotors on the top stopped spinning and locked in a streamlined position, while the propellers on the rear pushed the aircraft forward like a traditional fixed wing plane. As shown in the video, the transitions for the Prosperity I are seamless, safe and smooth thanks to the quality of the engineering and the rigorous attention to detail in the complex aerodynamics.

AutoFlight CEO Tian Yu, who has over two decades of experience designing and building electric aircraft, and 300 electric aviation-related patents, said: "The team and I are thrilled to have cracked the smooth transition phase of eVTOL flight, unlocking the skies for Prosperity I and our commercial products. We are confident we have a good design underpinned by sound engineering, and delighted to see that the transition was smooth, safe and seamless."

Mark Henning, Managing Director of AutoFlight Europe said: "Achieving a smooth transition phase in record time, from prototype to flight, underlines the calibre of the engineering team we have at AutoFlight and gives great confidence as we progress into the development phase and layout plans for our first manned aircraft, the Prosperity I. The simplicity of AutoFlight's design lies in our patented 'Lift and Cruise' configuration, which combines superior range and safety with low technical complexity, making it affordable to manufacture, maintain and operate as an air taxi.

The milestone is the latest of significant recent developments for AutoFlight including the establishment of a European base in Augsburg, Germany, the appointment of Mark Henning (formerly of Airbus) as its European Managing Director, as well as $100 million investment from next-generation mobility investor TeamGlobal.