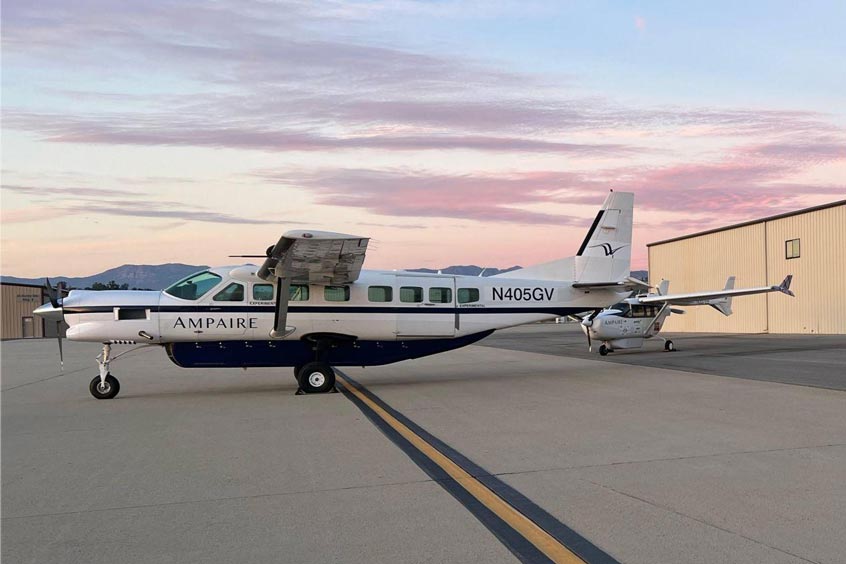 Ampaire, a leader in electric aviation, has received an award from the U.S. Department of Energy's advanced research unit, ARPA-E, for $9 million. The agency's SCALEUP program will fund the development of key hybrid-electric subsystems that can be produced in volume and meet the standards of the FAA and other certifying authorities.

“Ampaire has been flying and refining hybrid-electric prototype aircraft since 2019,” said CEO Kevin Noertker. “The next step is to develop a fully-integrated propulsion system, the AMP-H570, that meets strict certification requirements. SCALEUP will be central to supporting this process at Ampaire and contribute to the certification of the nine-passenger Eco Caravan.” The ARPA-E award, he said, is a validation of Ampaire's methodical, building-blocks approach to aircraft and propulsion development. The award follows notable accomplishments from Ampaire, including the first flight of the Eco Caravan, a global support agreement with Air France Industries KLM Engineering & Maintenance (AFI KLM E&M) and orders from airline operator WingTips and sustainable aircraft financier MONTE.

Ampaire operates two pioneering Electric EEL aircraft, which are Cessna 337 Skymaster aircraft upgraded to a hybrid-electric configuration. One is Ampaire’s market-survey demonstrator. The other is a technology testbed called the ARPA-E Bird currently flying the company’s third technology generation.

Under ARPA-E’s CIRCUITS program, this second flying testbed has been used to evaluate prototype components and systems from Ampaire and other ARPA-E contractors. While these systems were not designed to meet FAA certification requirements, they advanced Ampaire and industry knowledge that will lead to certifiable designs.

SCALEUP funding will accelerate the maturation of advanced technologies that will be tested on the ARPA-E Bird and the prototype Eco Caravan. New systems will be designed for volume manufacturing and will reduce cost, increase reliability and incorporate safety features necessary to pass regulatory certification tests.

SCALEUP funding will be devoted to developing certifiable subsystems in three areas:

• And the integration of the thermal-runaway-protected energy storage system.

These three systems will be tested first on the ARPA-E Bird and then applied to the Eco Caravan, which is already in the process of earning FAA supplemental type certification. A prototype Eco Caravan made its first flight on a fully integrated hybrid-electric propulsion system on November 18, 2022. Ampaire will fly a second production-conforming Eco Caravan next year. That aircraft will be used in certification test flights. Ampaire plans to complete the certification of the Eco Caravan in 2024.

The Eco Caravan is an upgrade of the Cessna Grand Caravan that reduces fuel consumption and emissions by up to 70 percent. Emissions are near zero when using sustainable aviation fuel. Cost of operation is reduced by 25 to 40 percent depending on airline route structure. Cost per available seat mile is near that of driving.

The hybrid-electric aircraft preserves the 9-passenger payload capability of the Grand Caravan, and significantly improves range with a reduction in fuel load. Maximum range is beyond 1,000 miles. The Eco Caravan’s range and load hauling capability is in marked contrast to proposed all-electric, hydrogen-electric and even other hybrid-electric designs.

The Eco Caravan is equipped with high voltage charging plugs for clean-grid recharging but can also recharge its batteries using the on-board engine. The ability to operate independent of ground charging is critical for eliminating barriers to rapid deployment of the Eco Caravan while ground infrastructure is developed.