Navigate directly to favourite company, aircraft and sector pages with our tracker feature.
Ulan-Ude rolls out accident-resistant Ka-226T fuselages
The Ka-226T is the first machine in Russia's helicopter industry to be developed entirely in virtual space without the use of paper media. Fuselages that reduce fuel system accidents are the latest piece of the puzzle. 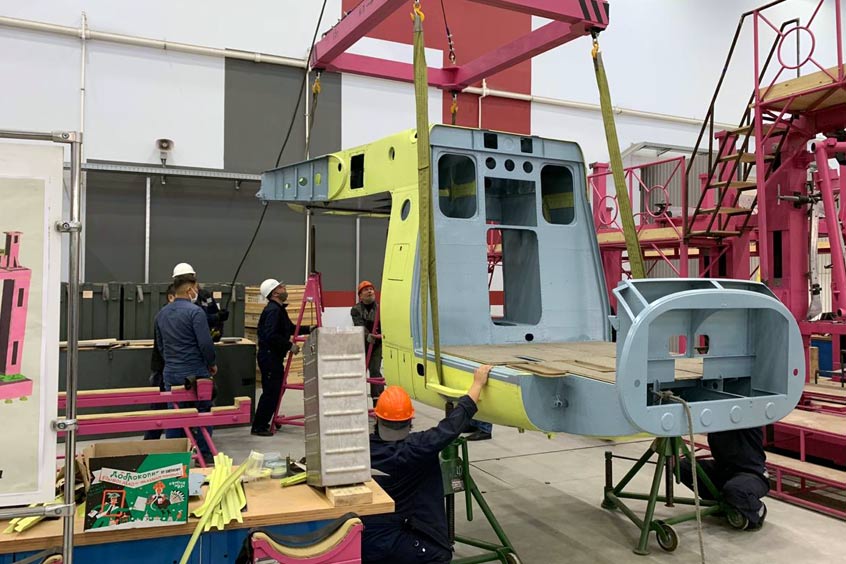 The fuselage of the Ka-226T helicopter is manufactured at the Ulan-Ude Aviation Plant.

The Ulan-Ude Aviation Plant of Russian Helicopters (U-UAZ), part of the Rostec State Corporation, has completed the preparation of a fuselage assembly line for the Ka-226T light helicopter. The line has produced two fuselages, which at the end of November will be transferred to JSC ‘Technodinamika’ for testing an accident-resistant fuel system.

During a visit to the Ulan-Ude plant, the Minister of Industry and Trade of the Russian Federation Denis Manturov became acquainted with the assembly line of the Ka-226T helicopter. Until the end of 2020, U-UAZ will assemble a number of stands and assemblies of the Ka-226T helicopter for static, dynamic and life tests. In particular, the production of a test bench for bird resistance and a test bench for windshield cleaning systems is currently being completed.

“Now we are focused on the manufacture of fuselages and machine units for various tests, but at the same time we are working on the creation of prototypes of the Ka-226T helicopter, which we expect to fly into the air in the first half of 2021,” explains U-UAZ MD Leonid White.

To date, the enterprise has already manufactured thousands of items of equipment, from small templates to large-size assembly slipways. In September, a slipway for the general fuselage assembly of the Ka-226T helicopter was manufactured and installed, into which pre-prepared units are laid: the cockpit bottom, middle and central fuselage compartments, tail booms and tail assembly.

A complete set of design documentation, taking into account all the requirements of potential customer the Ministry of Defense of the Republic of India is currently being transferred to the plant. This process is due to be completed by the end of the year.

The Ka-226T light multi-purpose helicopter with a twin-rotor coaxial carrier system has a MTOW of 3.6 tonnes and is capable of carrying up to 1 tonne of payload. The Ka-226T became the first machine in the domestic helicopter industry to be developed entirely in virtual space without the use of paper media. This makes it possible to significantly reduce risks and costs, both for the development of the helicopter itself and for making changes during the subsequent modernisation of the machine.