Navigate directly to favourite company, aircraft and sector pages with our tracker feature.
Supersonic X-59 enters final assembly phase
Removed from its jig, the X-59 is ready for final assembly including the first power-on of the aircraft to test its internal systems. The first flight is planned for 2022. 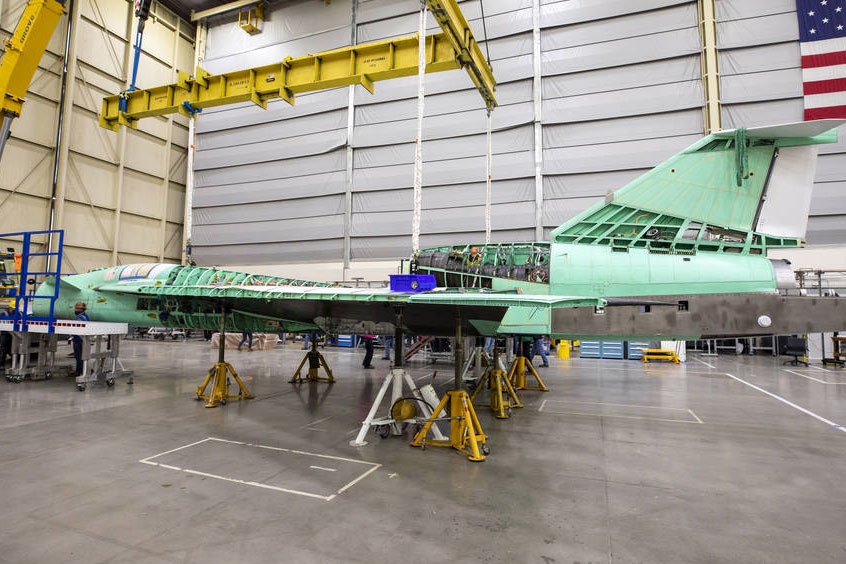 A view of the X-59 being supported by ground supports in preparation for installation of the landing gear and other hardware required for structural testing.

NASA and Lockheed Martin have removed the the X-59 Quiet SuperSonic Technology (QueSST) aircraft from its jig system, or external supports. The next step is proving the research aircraft is structurally sound and ready for final assembly.

The team has made significant progress on the X-59 QueSST assembly. In late October, they pulled the aircraft away from the jig support system. The jig, which is similar to scaffolding, helped ensure all of the aircraft's hardware was placed together correctly throughout the manufacturing process.

Now that the X-59 is free from the jig, it will move on to the final assembly phase, including the first "power-on" of the aircraft to test its internal systems. Once that is complete, the X-59 will be shipped to Lockheed Martin's facilities in Fort Worth, Texas, where structural tests will be conducted. The first flight of the X-59 is planned for 2022.

Most of the preparation for the X-59's construction involved more than a decade's worth of research on quiet supersonic technology. NASA's quiet supersonic mission plans to bring all of the science and technology developed during those years into the spotlight.

For David Richwine, NASA's X-59 deputy project manager for technology, seeing the construction of the aircraft feels personal: "I have been working on supersonics technology, and the predecessor to the concept for the past 15 years. I have more of an emotional attachment because I have put so many years into this mission.

"It's pretty simple to move the jig away," he says. "It's the preparation that's more time consuming."

Initial construction of NASA's X-59 began in 2018 at Lockheed Martin's Skunk Works facility in Palmdale, California. The X-59 will be flown as part of a mission to collect data on quiet supersonic flight and public reactions to supersonic "thumps". The plane is shaped in a way that reduces a sonic boom typically associated with supersonic aircraft to a quiet sonic thump to people on the ground. The mission's findings will be sent to regulators to help create new rules regarding speed limitations on supersonic flight over land.