Navigate directly to favourite company, aircraft and sector pages with our tracker feature.
MC-21-300 flies with Russian composite wing
Certification of the MC-21-300 aircraft is nearing completion, and it is planned to start delivering it to customers in 2022. The MS-21-310 aircraft with the new Russian PD-14 engine is undergoing flight tests. 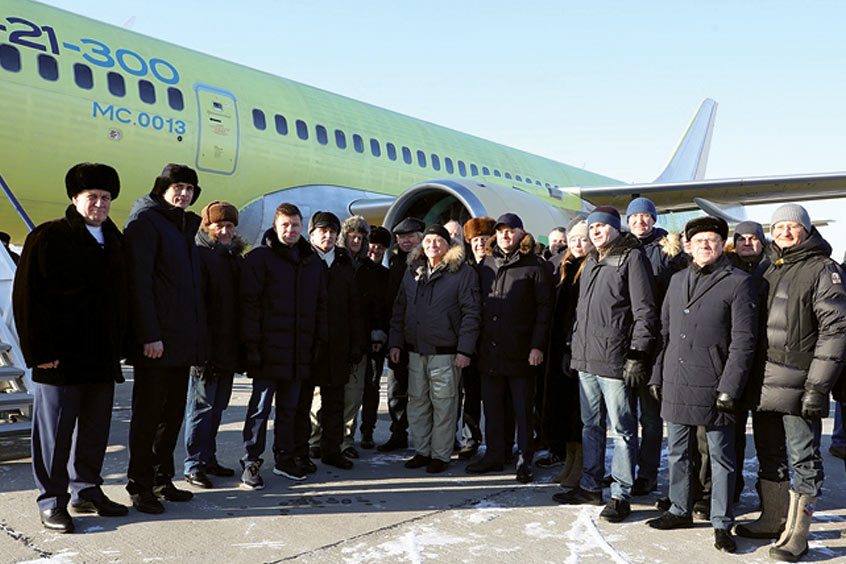 The team celebrates after the MC-21-300 aircraft makes its first flight with a wing made of Russian-made polymer composite materials. 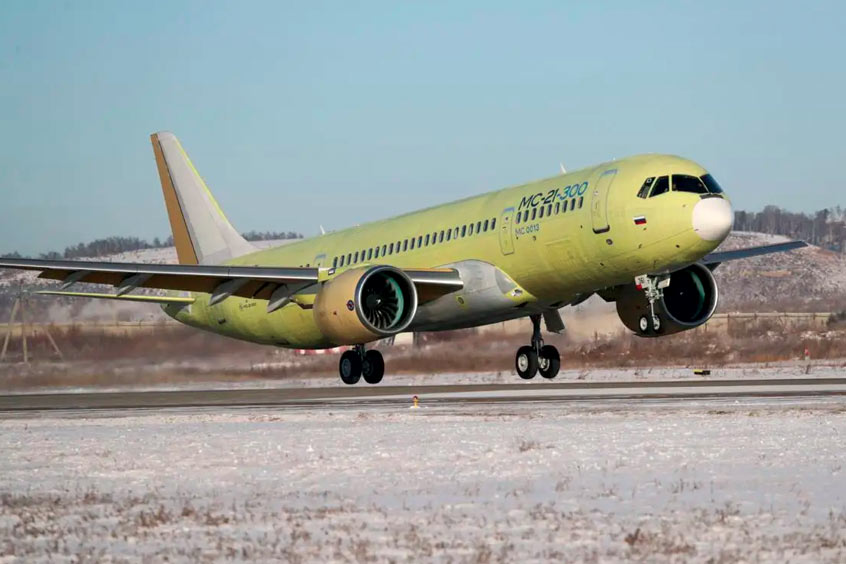 The MC-21-300 aircraft makes its first flight with the new wing.

On December 25, 2021, the MC-21-300 aircraft, the wing of which is made of Russian-made polymer composite materials, made its first flight, from the airfield of the Irkutsk Aviation Plant.

"In addition to the three aircraft in the final assembly shop, three more MC-21-300 are at different stages of production. All of them will receive a wing made of Russian composites. Within the framework of the MS-21 program, a big step has been taken in the development of cooperation between aircraft manufacturing plants in Russia. In the structure of the UAC, centres of competence have been created, specialising in the production of individual units. Aviastar produces fuselage panels and tail unit MS-21, Voronezh VASO - engine pylons and landing gear fairings. AeroComposite-Ulyanovsk produces the wing box, KAPO-Composite - the wing mechanisation. These centres are involved in promising projects in the Russian aircraft industry," says UAC General Director Yuri Slyusar.

General Director of PJSC Irkut Corporation Andrey Boginsky adds: "In 2022, we plan to start supplying MC-21-300 aircraft to the first operator, Rossiya Airlines, which is part of the Aeroflot group. All production aircraft will be equipped with a wing made of Russian composites. The aircraft will be delivered in a comfortable two-class layout - 16 business class seats, 153 economy class seats."

"The first flight of an aircraft with a wing made of Russian composites proves that we did everything right, the MC-21 program is consistently and steadily moving forward, despite sanctions and unfair competition," says Denis Manturov, Minister of Industry and Trade of the Russian Federation. "This is the result of the development of the competencies of the aviation industry and related industries and unprecedented government support. The total amount of funds allocated by the Ministry of Industry and Trade of Russia for the creation of domestic materials for the composite wing amounted to 4.4 billion rubles. The technology introduced for the production of the MC-21 wing has a number of advantages. It, in comparison with the traditional autoclave technology, allows you to increase productivity, reduce labour costs and cost, and provide the ability to form large parts. To date, a composite wing has been manufactured for two aircraft, the third set is being manufactured. We plan to receive changes to the type certificate regarding the composite wing made of Russian materials in the second half of 2022.

Domestic materials for power composite wing structures were developed with the participation of scientists from Moscow State University and Rosatom, aviation industry specialists. Qualification tests of materials showed their compliance with the requirements for the design of the MC-21 aircraft. The wing consoles and the centre section of the MC-21-300 aircraft are manufactured at the AeroComposite-Ulyanovsk enterprise. In the production of the wing, the technology of vacuum infusion is used, which is patented in Russia."

"The share of composites in the MS-21 design is about 40%, which is a record figure for medium-haul aircraft. The use of strong and lightweight composite materials has made it possible to create a wing with unique aerodynamic characteristics unattainable for a metal wing. Improved aerodynamics have made it possible to increase the width of the MC-21 fuselage and expand the cabin, which brings new advantages in terms of passenger comfort. This is the first medium-haul aircraft in the world where such solutions have been applied," says the head of Rostec Sergey Chemezov.

MS-21-300 / 310 is a new generation medium-range aircraft with a capacity of 163 to 211 passengers. It is aimed at the most massive segment of the passenger transportation market in Russia and in the world.