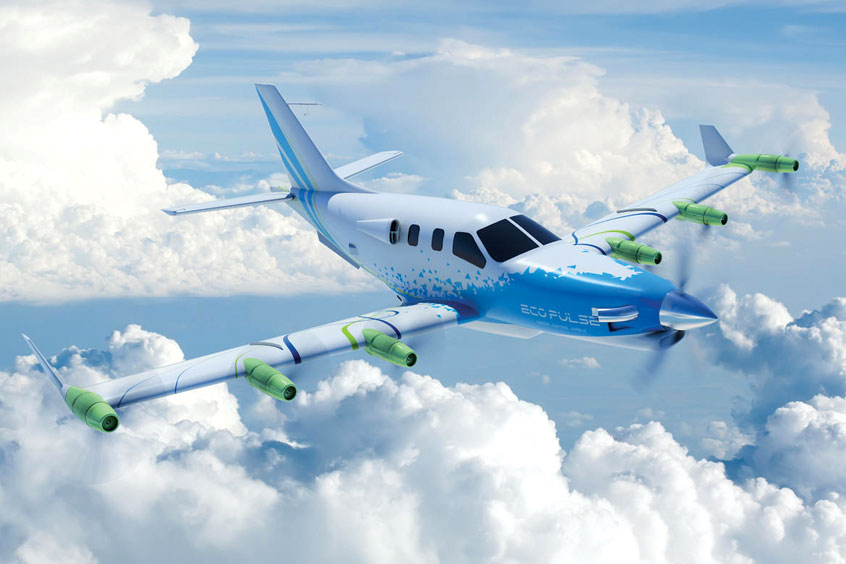 The new battery in the EcoPulse demonstrator is being developed by Airbus Defence and Space in Toulouse.

Airbus is focusing attention on a key element of its EcoPulse demonstrator; the high-voltage Lithium-Ion main battery system developed by Airbus Defence and Space in Toulouse.

In June last year Airbus successfully performed the EcoPulse wind tunnel testing at its facility in Filton, UK. These tests evaluated the performance characteristics of the propeller and the cooling process of the six 'distributed' electric propulsion units. In 2022, the assembly of the demonstrator - a light aircraft platform supplied by Daher - is well under way, paving the way for its first test flight later this year.

The battery itself is approximately 2.3m long by 75cm wide and 20cm deep. It is mounted under the fuselage and integrated with a reinforced aerodynamic fairing. The battery is one of the two electric sources on the demonstrator, the other being an "e-Auxiliary power Unit" (e-APU) provided by Safran.

Lightweight, compact, with very high battery power and energy density, the battery reaches these goals thanks to several years of research and development as part of Airbus' aircraft electrification and sustainability initiatives. Less powerful high-voltage batteries were previously installed on CityAirbus and Airbus Helicopters FlightLab. The result of such incremental advances is this latest high-voltage Lithium-Ion battery. The unit, as designed for EcoPulse, weighs around 350kg, is able to achieve 800 Volts DC and can deliver up to 350 kilowatts of power.

Not only is this power level sufficient for driving EcoPulse's six electric propulsors, depending on the test conditions, but it also happens to be similar to what would be needed for an airliner's non-propulsive secondary systems. Airbus is exploring the latter separately as part of its micro-hybridisation research.

"We started to work on the high voltage Li-ion a few years ago," recalls Julien Laurent, Battery Project Leader, and for this prototype we designed it entirely in-house.

"Our design featured several thousand Lithium-Ion cells, incorporating various safety measures to prevent thermal runaway - such as connecting each cell with wire bonding. Another innovative part is the active cooling system which ensures the optimum temperature for normal operation. Furthermore, this battery system also includes a tailored Battery Management System. This helps to minimise maintenance thanks to its built-in test features and ability to highlight the charge status or whether the cells need to be rebalanced."

Airbus days that the battery's high-voltage capability when applied in this context is unique since it is not available today either in aerospace or automotive industries. Notably, the heavier batteries which are used today on aircraft are typically quite low voltage - 28Vdc - and their low energy density means that they are mainly used to start the APU and for emergencies. Moreover, the majority of these are Nickel-Cadmium (NiCad) based - which, under the EU's REACH regulation, will soon have to make way for alternative environmentally-compliant battery chemistries, such as Lithium-Ion.

As for the automotive industry, while there are indeed batteries currently used to power electric cars, these have been too bulky and heavy for aerospace use. In short there are currently no standalone off-the-shelf battery systems which can fulfill our needs in terms of safety and performance.

Following cell selection and subsequent design integration for EcoPulse, several prototype/specimen batteries will very soon be subjected to testing in Toulouse according to stringent aeronautical standards. These tests will evaluate performance, and environmental and safety attributes, so that the team can be confident it will behave properly and safely once installed into the EcoPulse vehicle.

By understanding high voltage battery behaviour thanks to this testing, Airbus intends to develop vital competence for applying micro-hybridisation architectures to future aircraft, for example, to optimise power/energy management of non-propulsive functions such as air conditioning, auto flight and flight controls.