Navigate directly to favourite company, aircraft and sector pages with our tracker feature.
MTU takes long-term approach with flying fuel cells
The goal is to replace one of the two conventional gas turbine engines on a test Do228 with a 600 kW electric powertrain with energy supplied by a hydrogen-powered fuel cell by the middle of this decade. 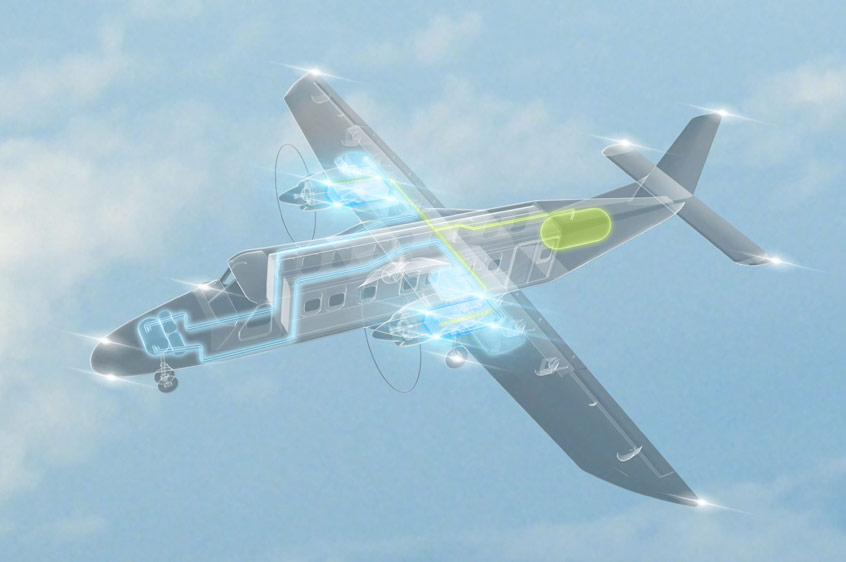 The Do228 research project is being headed by the DLR, which is providing the research aircraft and conducting the flight experiments.

MTU Aero Engines has set a target of 2035 to bring its Flying Fuel Cell (FFC) concept into operation on regional aircraft.

A growing team, currently of about 70 experts, is already working on the FFC in Munich. The principle behind it is that a fuel cell converts liquid hydrogen into electrical energy. which powers an electric motor, which in turn drives the propeller.

Aviation propulsion systems are a major factor in achieving zero emissions in the skies, says MTU. As part of its Clean Air Engine (Claire) technology agenda, it is working on various concepts for all thrust and power ratings to achieve the aviation industry's big goal, including the evolution of the gas turbine on the basis of the Geared Turbofan and other 'revolutionary' propulsion concepts. “Among other things, we are forging ahead with the full electrification of the powertrain,” explains MTU coo Lars Wagner. “We've identified converting liquid hydrogen into electricity using a fuel cell as the area with the greatest potential for achieving this.”

Fuel cells are highly efficient. Beyond that, they do not emit CO2, nitrogen oxides (NOx), or particulates; the only emissions are of water. “The FFC reduces the impact on the climate by as much as 95 percent, so it's practically zero,” explains Dr. Stefan Weber, svp engineering and technology.

Plans call for the FFC to be used at first on shorter commuter and regional flights. Weber continues: “We're aiming to launch on the market in 2035 there.” With improved efficiency, the Flying Fuel Cell will then be used in short- and medium-haul flights as well starting in 2050, further reducing the climate impact of commercial aviation.

Work to develop the FFC technology is proceeding in cooperation with the German Aerospace Center (DLR). A Do228 is being used as a technology platform and flight demonstrator. The goal is to replace one of the two conventional gas turbine propulsion systems with a 600 kW electric powertrain with energy supplied by a hydrogen-powered fuel cell and test the new configuration. The partners aim to launch the flying lab in the middle of this decade. Extensive ground tests and advance testing will take place before then.

“MTU's job is to develop the entire hydrogen-powered fuel cell powertrain, including the liquid hydrogen fuel system and controls,” explains Barnaby Law, MTU's chief engineer Flying Fuel Cell. The Do228 research project is being headed by the DLR, which is providing the research aircraft and conducting the flight experiments. The research institution is also responsible for integrating the powertrain into the aircraft.

At the same time that this work is under way, MTU is also cooperating with the European Union Aviation Safety Agency (EASA) and working on approval requirements. Weber adds, “We have embarked on an innovation partnership where we are working together to study possible options for future certification of a flying fuel cell, since everyone involved is in uncharted territory here.” New standards, approval specifications, and documentation procedures will have to be defined in order for flying fuel cells to operate safely as an innovative propulsion concept.

COO Wagner sums up: “For an engine manufacturer like MTU, developing an airworthy fuel cell is a big opportunity, since the experience and data we gain in the process, including in the areas of control and qualification under aviation law, will be crucial to the further product development process.”