Navigate directly to favourite company, aircraft and sector pages with our tracker feature.
RED engine selected for Ampaire's Eco Caravan
Ampaire conducted the first Eco Caravan hybrid powertrain ground runs in April, with plans to fly the aircraft in the second half of the year. The target for STC approval is 2024. 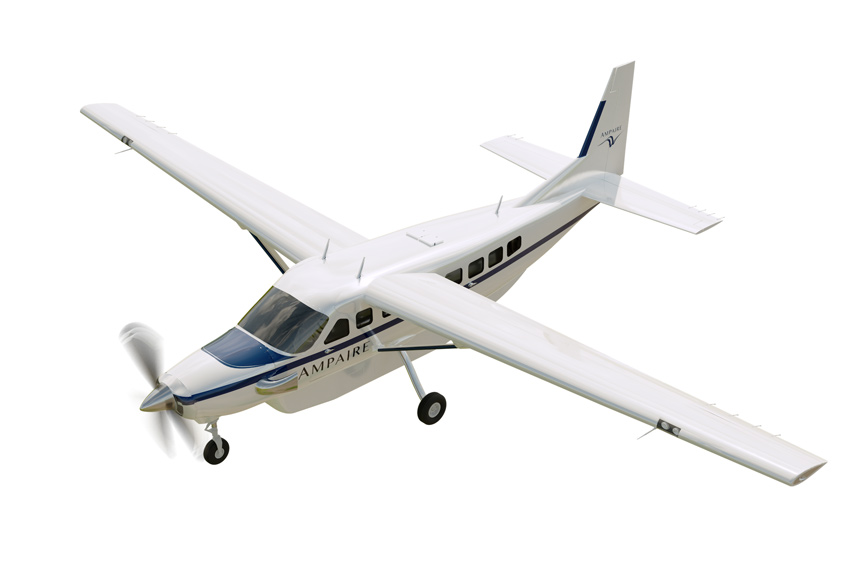 The Eco Caravan will retain the payload capabilities of the Grand Caravan, carrying up to 11 passengers or 2,500 pounds of cargo. Range improves to 1,100 nautical miles.

Ampaire is to use a RED Aircraft AO3 series compression ignition engine rated to 550 hp (405 kW) in an integrated parallel configuration for its upgraded Cessna Grand Caravan model. The RED engine provides the base power and the Ampaire electrical system provides the peak power.

The two companies will work to commercialise electrified propulsion aircraft, with Ampaire developing complete hybrid-electric propulsion systems and certifying them for various applications up to 800 hp, while RED Aircraft will develop, certify, and supply Jet A/SAF compatible engine subsystems to Ampaire.

The new propulsion system for the Eco Caravan offers substantial benefits to users and will be the first in a series of electrified fixed-wing aircraft that reduce aviation's carbon footprint.

Fuel consumption is reduced by 70 percent on shorter trips and 50 percent on longer ones with greater corresponding reductions in CO2 emissions due to the contribution of the electric motor and the optimized use of the RED engine.

The RED engine provides high thermodynamic efficiency twice that of a comparable turboprop engine. It is JET A/SAF compatible.

Engine initial cost and ongoing maintenance are substantially lower than for a turboprop engine. Durability and reliability of the RED engine has been demonstrated in applications such as the Air Tractor AT 301, an agricultural aircraft, and the YAK-52 aerobatic trainer.

Eco Caravan operating cost is 25-40 per cent lower depending on an operator's route structure.

Ampaire conducted the first Eco Caravan hybrid powertrain ground runs in April 2022, with plans to fly the aircraft in the second half of the year. The company is working with the FAA to achieve supplemental type certificate (STC) approval by 2024.

The Eco Caravan will retain the payload capabilities of the Grand Caravan, carrying up to 11 passengers or 2,500 pounds of cargo. Range improves to 1,100 nautical miles.

“The modern, powerful and ultra-fuel-efficient RED engines have exactly the right characteristics for the Eco Caravan's hybrid-electric propulsion system and for many other upgrades or all-new designs we may pursue,” says Ampaire CEO Kevin Noertker. “We are very pleased to take this first step in collaboration with a company that shares our goal to decarbonize aviation while reducing costs for aircraft operators and their passengers.”

“RED Aircraft sees enormous potential for hybrid-electric aircraft and believes the Eco Caravan is just the first step to bringing a new level of efficiency and vastly lower emissions to a large swath of aviation,” adds Jürgen Schwarz, CEO. “We are thrilled to be pursuing these opportunities hand-in-hand with Ampaire.”