Navigate directly to favourite company, aircraft and sector pages with our tracker feature.
Project harnesses cobots to dispense wafer-thin sealing materials
AGREED is making progress on wafer-thin dispensing of complex sealing materials, which is essential in the production of large-scale and complex aircraft components. 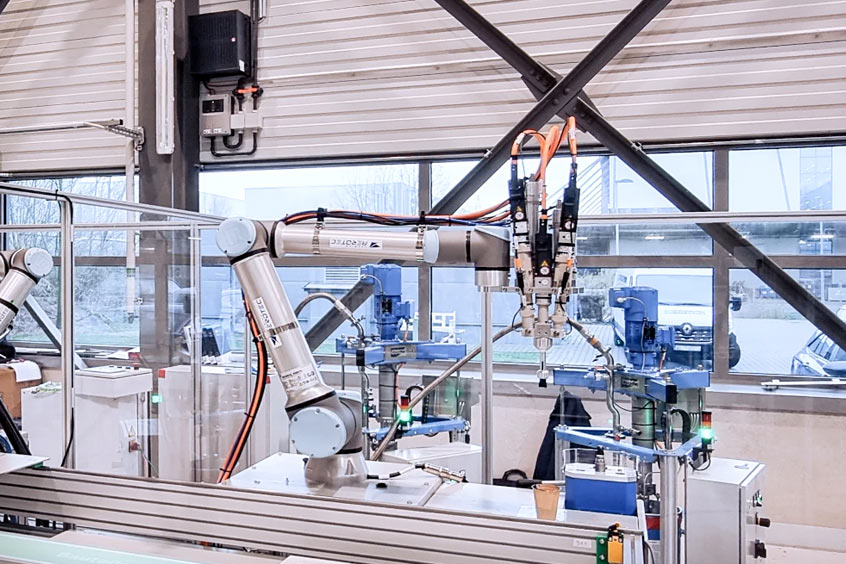 The dispensing system on the cobot.

The AGREED research project run by DLR has now set its sights on increasing the degree of automation in the structural assembly of single-aisle aircraft. It aims to reduce the manual production processes that currently exist and deliver greater economic efficiency.

ViscoTec has been involved in the work, and says its progress on wafer-thin dispensing of complex sealing materials is an important part of the project. For Premium AEROTEC, a Tier 1 supplier of aerostructures, this application is essential in the production of large-scale and complex aircraft components.

Research was carried out in Nordenham in Lower Saxony and in Augsburg. The two-component vipro-DUOMIX dispensing head, which was specially designed for sealing materials and was already established on the market, could be used with industrial robots. The biggest challenge was the application of complex materials in an extremely thin layer, which the ViscoTec team was able to solve with a specially developed nozzle. And an integrated mechanical control system developed jointly with PAG, consisting of a spacer and spring suspension.

In Nordenham, the ViscoTec team was required to have considerably more development competence, because here the production was to be partially automated via cobots and therefore a human-machine collaboration was to be achieved. For this purpose, a special end effector (<10 kg) - based on a two-component system of lightweight design - was developed for the cobot and placed on the front of the robot arm. It is optimally designed for light loads and guarantees safety during the collaboration. The two-component dispensing material is delivered in separate bulk containers. The tanks are located at the end effector and are fed via material couplings at the tank station. This in turn is connected to the emptying system via hoses. The concept developed by the ViscoTec engineers combines the advantages of large containers - process reliability and low cost - with those of small containers, which are more flexible in terms of material application. The elimination of a hose connection between the large container and the dispensing end effector on the cobot enables a dispensing application free of mechanical restrictions and therefore more flexibility across all degrees of freedom.

Tests in ViscoTec's own technical centre during the development phases enable the layer-thin application of a complex sealing material, which is of great importance for research at both locations. Whereas previously the materials had to be mixed in an upstream process and any material not required had to be discarded because of the rapid onset of curing, precision dispensing and mixing is now carried out immediately before the material is applied and the mixing ratio is maintained.

The results of the research were well received by the DLR, which is in charge of the project, and this will simplify future technological developments such as reinforcement learning strategies. Robots can - after learning - independently perform joining tasks in the aerospace industry, which are also facilitated by ViscoTec's dispensing technologies.

AGREED (Automation for flexible and expandable shell assemblies with digital intelligence) is run by the Institute of Structures and Design, part of the German Aerospace Center DLR, scientists of the Chair of Technologies & Management of Digital Transformation and engineers and technicians of other project partners, and carries out research into the use of digitalization and artificial intelligence to automate the assembly of aircraft shells.

AGREED was an internal project of DLR and was successfully carried out between January and December 2021. In addition to technological research, DLR took on the responsibility for the administrative and planning aspects. The work was coordinated in cooperation with the main contractor Premium AEROTEC GmbH. Other participants from industry and research were subcontracted to provide additional support: Broetje-Automation GmbH, ViscoTec GmbH, Bergische Universität Wuppertal, Fraunhofer IFAM, Fraunhofer IFF and Capgemini.