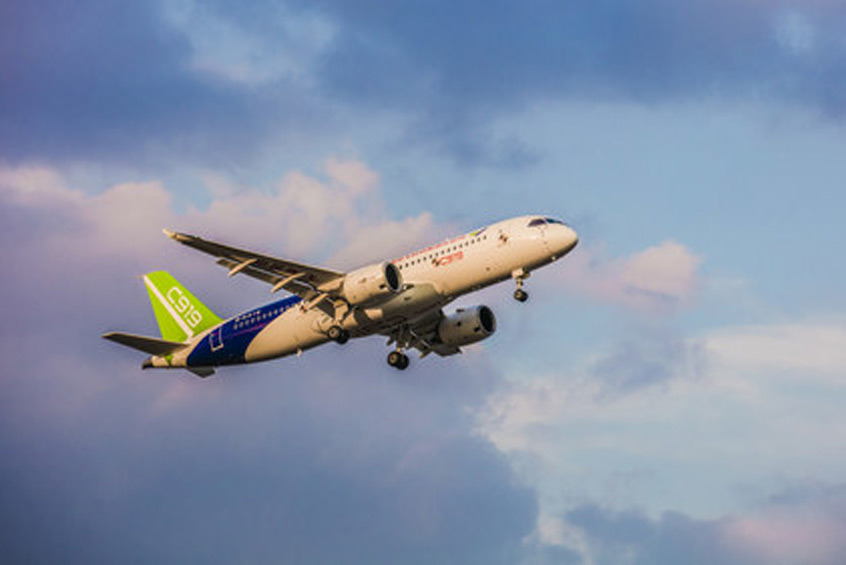 COMAC's C919 jetliner has been issued its airworthiness type certification, clearing the way for the aircraft's future entry in commercial service.

The C919 is a single-aisle trunk airliner with independent intellectual property rights developed by China in accordance with international standards. Its type certification by the Civil Aviation Administration of China (CAAC) was announced by COMAC in a congratulatory banner on the aircraft manufacturer's website that said: “At the exciting moment of celebrating C919 obtaining Type Certificate issued by CAAC, we sincerely thank global suppliers, partners, customers and all circles for their support and encouragement. We have worked together for a long time, hand in hand, to succeed in developing the C919 aircraft.”

“The Nexcelle teams can be proud of the C919's airworthiness certification milestone, culminating years of their dedication in developing a nacelle system that provides increased efficiency and sustainability, along with enhanced maintainability for airline operations,” says Sugato Bhattacharjee, the President of Nexcelle.

Bhattacharjee added that the C919's airworthiness approval represents a true milestone for the aviation propulsion sector, building on the success of Nexcelle's other product, the nacelle on GE Aviation's Passport engine for the Global 7500 business jet, which was certified by the Canadian airworthiness authority, Transport Canada, in September 2018.

Deployment of the O-Duct's is performed with an evolved electrical thrust reverser actuation system (ETRAS), replacing heavier hydraulics that typically are used in thrust reversers, while also improving maintainability.

Another Nexcelle innovation on the nacelle is the fan cowl, which is structurally integrated to the LEAP-1C engine, along with an integrated mounting system for the nacelle that reduces engine distortion and enhances on-wing performance.

The nacelle also incorporates an extensive use of lightweight and state-of-the-art noise-attenuating composite materials, and also is equipped with a low-drag front end that incorporates an air inlet with a one-piece lip skin. As the largest of its kind to enter production on a higher-thrust commercial jet engine, this air inlet improves airflow and contributes to lower noise.

Additionally, the inlet has a directed flow nozzle deicing system that more efficiently swirls engine bleed air within the inlet lip. The use of this deicing lowers the nacelle's weight while providing increased efficiency and improved maintainability when compared to traditional nacelle deicing systems.

Honeywell is also committed to providing innovative technical solutions for the C919. Since the ARJ21 project, it has established a close partnership with COMAC to jointly develop the aviation market. "We are honored to contribute to the C919 project. Looking to the future, we look forward to continuing to strengthen cooperation with COMAC and make greater contributions to China's aviation industry," it says.

Honeywell provides four sets of advanced technical solutions and comprehensive supporting services for the C919, including auxiliary power systems, wheel and brake systems, flight control systems and air data and navigation systems to improve its safety, reliability and environmental performance and operational efficiency. With these advanced products and technical solutions, Honeywell and COMAC are working together to bring a safe, economical, comfortable and environmentally friendly flight experience to C919 customers, pilots and passengers.

Many of Honeywell Aerospace's local Chinese employees support the C919 project. In addition, hundreds of Honeywell employees in Asia, North America and Europe are also involved in the C919 program. In 2009, Honeywell established its China Aviation Academy in Shanghai to provide technical training for Chinese aviation companies including COMAC, cultivate talents in the future aviation field, and help China's aviation industry take off.