Blainjett's hemi-rotor drone cruising by a runway with main rotors halted in an outward fixed position. 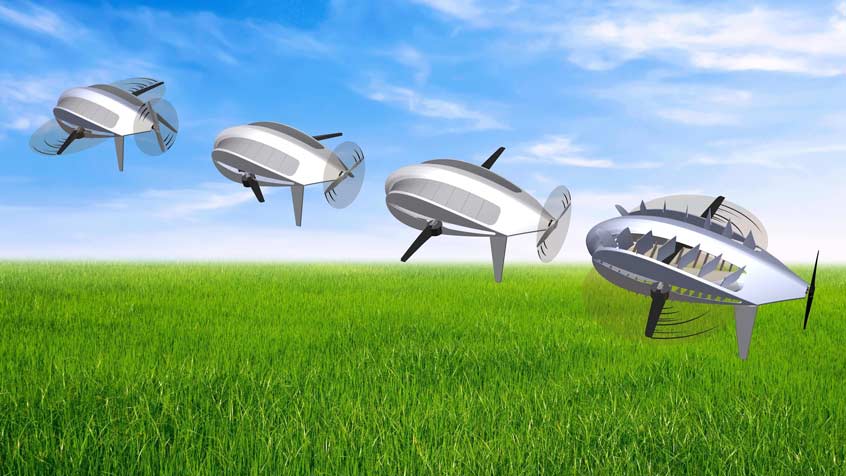 A concept illustration shows the hemi-drone's transition (right to left) from hover to cruise then to high speed levels; From the hover (far right) with vents open the drone accelerates to forward flight via engagement of the pusher prop. As speed increases, the rotors slow to a halt in a fixed, straight-wing position for initial cruise. They can then be rotated aft to achieve a desired sweep angle for high-speed cruise flight and then actively sweep in reverse (far left) for the highest speed.

"If our lab testing continues on its current trajectory," Blainjett president Cary Zachary says, "we believe our [hemi-rotor configured] prototype will boast the most efficient hover and forward flight profile of any rotor-borne VTOL aircraft."

Blainjett is applying the hemi-rotor concept to a subscale drone as part of a path to demonstrating that the configuration can scale to larger unmanned or manned aircraft in eVTOL applications from package delivery and cargo to transport and tactical military roles.

Blainjett's "hemi-rotor" design situates familiar vertical lift rotors (as seen on helicopters, UAM or drone aircraft) partially inside opposite sides of an enclosed fuselage. The airfoil-shaped fuselage also houses a pair of electric motors to drive the lift-rotors. A third motor situated in the empennage above an inverted V-tail powers a pusher prop.

The concept hinges on isolating the retreating rotor blades from the advancing blades, in effect neutralizing the retreating rotors. In a hover, conventional open-rotors generate an even amount of lift all the way around. But when a traditional rotorcraft flies forward, its rotor blades both advance forward into the relative wind and retreat from it during rotation. This yields a dissymmetry of lift on opposing sides of the rotor arc, eventually creating a hard speed limit.

Blainjett solves the problem by enclosing the inner half of each rotor disc within the aircraft fuselage. The fuselage incorporates an inner "hover door" and a series of top and bottom vents to facilitate pitch and yaw control (and relieve internal aerodynamic pressure) while in hover. Roll control is affected by power inputs to the mid-fuselage lift-rotors.

In hover and during transition to forward-flight, the rotors on opposite sides of the fuselage rotate into the relative wind (left rotor, clockwise andndash; right rotor counterclockwise). As Blainjett's subscale prototype transitions from hover to forward flight with thrust from its pusher-prop, its upper vent doors close and the retreating rotor blades are shielded from the relative wind, negating drag, loss of lift and the eventual negative lift that would occur at high speeds. The aerodynamic fuselage as well as the advancing blades, in contrast progressively produce lift.

This allows the rotors to be slowed and stopped to a straight or swept-wing fixed position as forward speed increases. In this configuration the rotors become fully articulating "wings," with super low drag and therefore are super efficient in forward flight. In the highest speed flight mode, they can actively sweep backwards, rotating in reverse for more drag reduction. The speed limitations imposed by the drag and lift-dissymmetry of compound rotor designs are dispensed without the complexity, drag and weight penalties of familiar tilt-rotor aircraft.

Positive, repeatable lab tests of the hemi-rotor prototype in different phases of flight showed expected lift and drag profiles for the semi-enclosed rotors in both spinning and fixed modes. The results confirmed Blainjett's baseline assumptions and provided experimental data to expand upon during the next phase of testing.

The company has secured use of Vertiq electric motor modules for integration in its forthcoming (V2) subscale prototype. Vertiq's electric motor modules are capable of halting rotation and maintaining an aerodynamically-favorable fixed position or freewheeling in reverse direction during selected phases of flight.