Navigate directly to favourite company, aircraft and sector pages with our tracker feature.
Germany approves shimless assembly automation project
High-precision measurement will be combined with innovative process technology and end-to-end digitisation such that manual compensation of component tolerances (so-called "shimming") can be consigned to history. 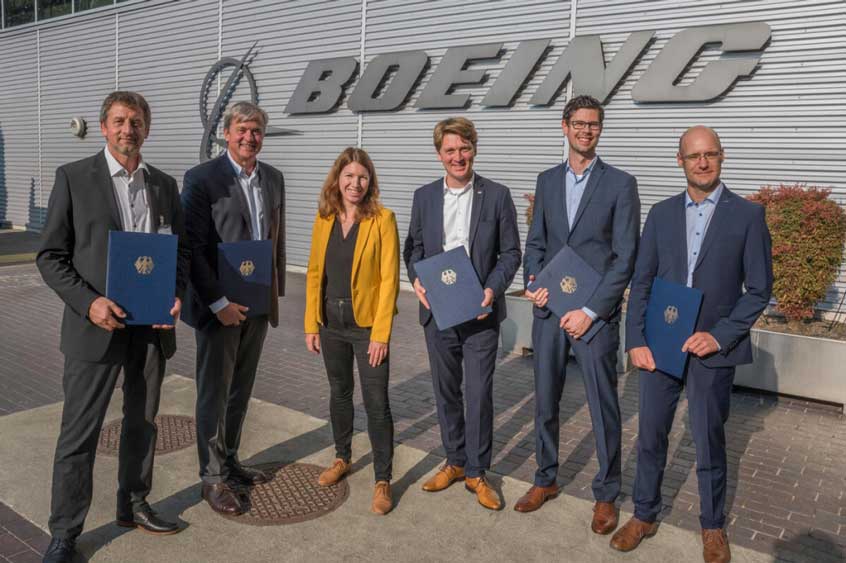 German technology companies are working together with Boeing under the leadership of Broetje-Automation on the automated assembly of future aircraft generations within the SHILA project. Dr. Anna Christmann, the German government's aerospace coordinator, presented the funding notice for the project at the Boeing plant in Renton / Seattle. The project is being carried out under the aerospace research program of the German Federal Ministry of Economics and Climate Action (BMWK).

As part of a joint delegation led by the German Aerospace Industries Association (BDLI) and the BMWK, representatives of the German aerospace supply industry visited the Boeing site in Renton where the Boeing 737 MAX is built. As a special surprise for the SHILA project consortium, Dr. Christmann had in his luggage the funding notification for the jointly planned project.

"We are very pleased to be working together with industrial partners such as Broetje-Automation, the German government and numerous research institutes throughout Germany to research the future of our industry and to develop groundbreaking new technologies," says Dr. Michael Haidinger, President Boeing Germany. "We would like to thank Dr. Christmann and the Federal Ministry for Economic Affairs and Energy for the successful cooperation in the aeronautical research programs over the past few years."

SHILA stands for Shimless Assembly and is intended to enable a breakthrough in assembly technology for large aircraft. The aim is to lay the foundation for future aircraft programs, achieve significant efficiency gains and make a further contribution to making the aviation industry climate-friendly and future-oriented.

"In the project, high-precision measurement systems are combined with innovative process technology and end-to-end digitization in such a way that manual compensation of component tolerances (so-called "shimming") can be dispensed in the future, while at the same time enabling precision-fit, force-controlled joining," explains Markus Stoyke, SHILA project manager at Broetje-Automation. The company is an integrator of assembly technologies and specializes in automated assembly processes in the aerospace industry.

To achieve this, the project involves an industrial consortium of Boeing, Broetje-Automation, 3D.aero and KEBA, with scientific support from the Institute of Production Management at the Technical University of Hamburg-Harburg and the WZL Machine Tool Laboratory at RWTH Aachen University, to prepare joining and assembly processes in aviation for future aircraft programs.

3D.aero is contributing state-of-the-art technologies to the project, including high-precision component measurement. In addition to industrial automation solutions in the field of quality assurance, the company offers optical sensor systems for 3D component measurement and inspection.

For high-precision component processing, KEBA Industrial Automation is using the newly developed "LeviSpin" in the project. LeviSpin is a drilling spindle with magnetic bearings that enables vibration-supported machining, thus enabling increased productivity with significantly improved quality. At the same time, quality-relevant part-specific process data is generated, which can be further processed as part of the digital twin.

By combining the expertise contributed by the partners, the consortium expects to reduce manufacturing times by up to 75% and manufacturing costs by up to 25% compared to the conventional assembly process.

This project is made possible by funding from the German government's aeronautics research program. It thus not only secures know-how and production "Made in Germany", but also demonstrates Germany's role as a pioneer of production technology for the aerospace industry.