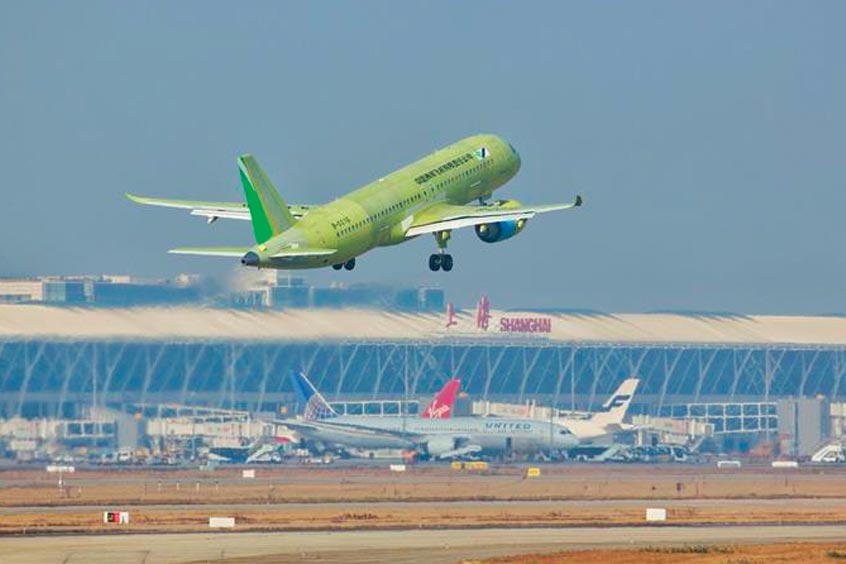 The no. 6 C919 jetliner prototype takes off on its initial flight, performed from Shanghai’s Pudong International Airport.

Nexcelle's state-of-the-art nacelles on the COMAC C919 are being put through their paces as all six prototypes for this twin-engine commercial jetliner have now joined the aircraft manufacturer's flight test program.

This reflects the further acceleration of C919 testing, as the initial flights of two other prototypes (aircraft no. 4 and no. 5) also were performed during 2019. The first three C919s took to the skies in 2017 and 2018.

With the test program in full swing, C919s are now flying from four locations in China: Pudong in the Shanghai region; the flight test center of Yanliang, situated in Shaanxi province; along with Dongying in Shandong province and Nanchang in Jiangxi Province.

The C919 has one of the world's first truly integrated propulsion systems, resulting from the close cooperation of Nexcelle as the nacelle supplier and CFM International, manufacturer of the LEAP-1C powerplants.

Nexcelle is supporting the accelerated flight test pace with the resources of its two parent companies: Safran Nacelles in France and U.S.-based Middle River Aerostructure Systems (MRAS). The Nexcelle joint venture has an established a presence in China, with its primary team located at COMAC's Shanghai Aircraft Design and Research Institute (SADRI) in the Xuhui District of Shanghai. For the build-up of nacelles and engines into complete integrated propulsion systems, Nexcelle and CFM International have an integration area located adjacent to the C919 final assembly line at COMAC's Shanghai Aircraft Manufacturing Co. location near Pudong International Airport.

Additionally, one of Nexcelle's team members is positioned at Safran Nacelles' Chinese industrial affiliate – Xi'an SAVI Nacelles – in the city of Xi'an, situated approximately 60 kilometers from the flight test center at Yanliang.