Navigate directly to favourite company, aircraft and sector pages with our tracker feature.
Epic gains production certificate for the E1000 turboprop
A long certification process, interrupted by the COVID-19 pandemic, has now been concluded, and Epic now has plans to further accelerate its production schedules. 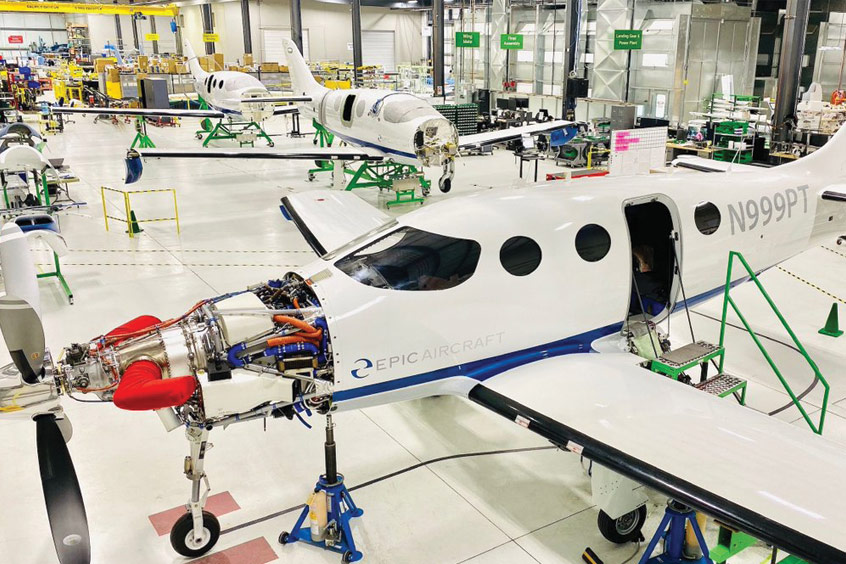 Epic Aircraft has received the FAA Production Certificate for its E1000 all carbon-fibre six-seat, single-engine turboprop. This allows Epic to accelerate aircraft deliveries by enabling them to manufacture, flight test and issue airworthiness certificates with reduced FAA presence.

The company's pursuit of this approval started years ago, in tandem with its Type Certification program, which concluded in November 2019. Epic was poised several months ago to complete the FAA Production Audit, a precursor to Production Certificate, when the COVID-19 pandemic disrupted plans.

FAA-mandated travel limitations restricted onsite visits, which are typically essential to the PC approval process. The FAA and Epic collaborated to devise new processes, using remote technologies, to conduct the required series of reviews and audits, prior to the final onsite assessment.

"Achieving FAA Production Certificate is tremendous milestone," says Epic CEO, Doug King. "It is a rigorous process involving the approval of a vast number of documents, processes and systems, with composites adding additional complexity. This approval validates the extraordinary efforts of our team and the extensive investments we have made in our world-class manufacturing and quality control systems.

"We applaud the FAA for their rapid adoption of these new tools and technologies in the face of this pandemic, allowing us to keep the PC process moving forward and ultimately achieving final approvals.".

The FAA presented the Production Certificate to King, surrounded by his manufacturing team in the E1000 Final Assembly area. The company has completed three customer aircraft deliveries so far this year, with plans to now further accelerate production schedules.