Navigate directly to favourite company, aircraft and sector pages with our tracker feature.
Sonaca to develop airframe for hybrid-electric Cassio
VoltAero's four-seat Cassio 330 could be in customer hands by 2023, with Sonaca's help to transition into serial manufacturing in Nouvelle Aquitaine. Larger models will follow. 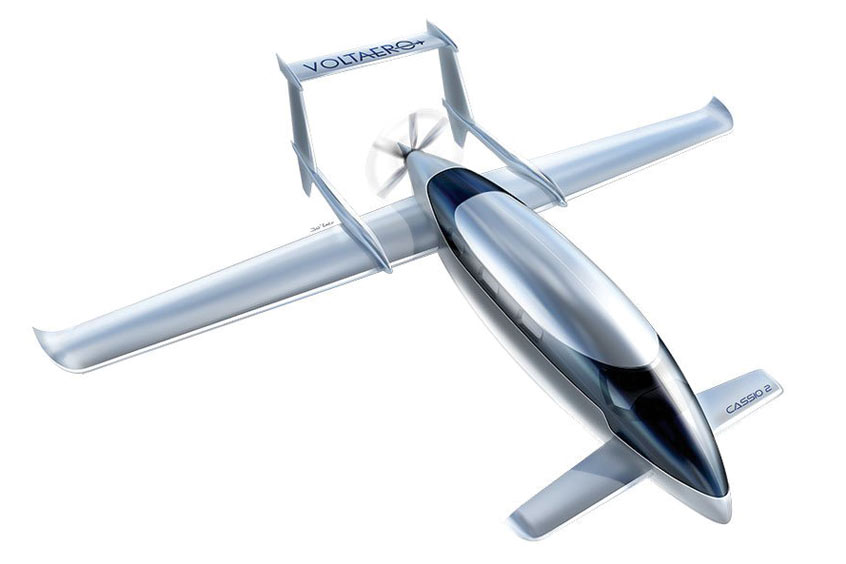 The production Cassio aircraft has a sleek, aerodynamically-optimised fuselage with a forward fixed canard and an aft-set wing with twin booms that support a high-set horizontal tail.

The airframe for VoltAero's Cassio hybrid-electric aircraft will be developed by Sonaca Group, applying this Belgium-headquartered company's expertise in optimised aerostructures to the VoltAero family of 4, 6 and 10-seat airplanes.

Under terms of the agreement unveiled today, Sonaca Group will transition Cassio from its current design status into a production-ready definition, and will oversee the aircraft's manufacture by an aerostructures producer to be announced at a future date.

"Our partnership with Sonaca Group takes us one very important step closer to production," said Jean Botti, VoltAero's CEO and Chief Technical Officer. "It continues our excellent progress in evolving a family of hybrid-electric airplanes – building on the flight evaluations now underway with VoltAero's hybrid-electric power module aboard our Cassio 1 testbed aircraft."

VoltAero's proprietary design for Cassio is based on a sleek, aerodynamically-optimised fuselage with a forward fixed canard and an aft-set wing with twin booms that support a high-set horizontal tail. Propulsion will be provided by a hybrid-electric power module in the aft fuselage "pusher" position, which integrates a cluster of electric motors with a high-performance internal combustion engine that serves as the range extender.

Hugues Langer, Sonaca's Chief Technology Officer, added: "Through our teaming arrangement, VoltAero will benefit from Sonaca's capabilities as one of the world's top 10 aerostructures companies, bringing our experience to transition Cassio from design into a production-ready aircraft."

Cassio aircraft will be built on a final assembly line in the Nouvelle Aquitaine region of southwest France, with VoltAero leading a growing team of world-class partners and suppliers. Licensed production opportunities will be pursued in North America and Asia.

Deliveries are targeted to begin in 2023, starting with the four-seat Cassio 330 version.