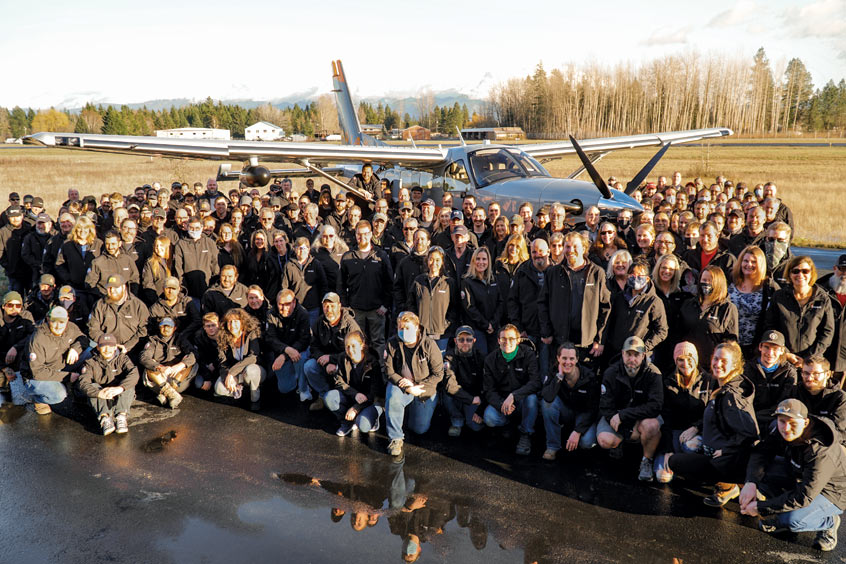 The Daher production team at Sandpoint, Idaho is shown with their milestone 300th Kodiak aircraft prior to its delivery.

The Kodiak was introduced in 2007 as a new-generation short takeoff and landing aircraft capable of bringing services and heavy supplies to the most remote regions on the planet.

Capable of taking off from unprepared strips of 1,000 feet and flying 1,000-plus miles with excellent operating economics, the Kodiak fills a niche between a helicopter and a business jet — able to haul passengers in refined luxury and integrating the capability of quickly converting the cabin to carry cargo, accommodate stretchers for air ambulance service, deploy skydivers and many other applications.

"Every day around the world, Kodiak aircraft meet the mission: from delivering crucial aid in conflict zones to providing comfortable airlift for business and personal travel," says Nicolas Chabbert, the Senior Vice President of Daher's Aircraft Division, and CEO of Kodiak Aircraft.

Daher acquired the Kodiak product line in 2019, and Chabbert reconfirmed the company's commitment to evolving and supporting the aircraft by further improving its capabilities and reinforcing the worldwide services network. With the acquisition, Kodiak joined Daher's TBM family of very fast turboprop aircraft, positioning the company as a leading manufacturer of general aviation airplanes and one of the world's three airframe producers with final assembly lines on two continents.

"This milestone delivery comes as the Kodiak program is on the rise following its acquisition by Daher in 2019," stated Mark Brown, Kodiak's Sales & Marketing Director, and Chief Demo Pilot. "Having been with Kodiak for eight years, the improvements made since 2019 in terms of manufacturing enhancements, production efficiencies and the product support integration is remarkable. These are exciting times, and I'm really proud to be part of the team at Daher's Aircraft Division."

Kodiak aircraft are in service around the globe, with more than half of them registered in North America, followed by Asia, the Pacific region, Europe, Africa, Latin America and South America. The global fleet has logged a combined total of more than 278,700 flight hours.

Additionally, the aircraft easily adapts to water operations through the installation of amphibious floats without the need for structural upgrades.

The Kodiak has benefitted from continual improvement since its introduction, with the Kodiak 100 Series III version incorporating features for improved flight safety, greater cabin comfort, augmented operational capabilities from both unimproved strips and on water with floats, as well as upgraded quality and more comprehensive maintenance coverage. All new-production Kodiak aircraft are being built in the Kodiak 100 Series III configuration .

The Kodiak 100 Series III's excellent versatility is further improved with incorporation of the largest tire size available for Kodiak aircraft (29 inches), a higher landing weight of 7,255 lb., and a lower zero-fuel weight that allows more payload – especially on shorter missions.

Additionally, Kodiak 100 Series III aircraft are float-ready for seaplane operations, and the standard pitch latch propeller enables easy manoeuvering at the dock by enabling the propeller to stay in a fine pitch during engine shutdown – giving greater control and safety on the water. Skin gap filler sealant on the aircraft is the fifth step in an industry-leading anti-corrosion process, providing protection especially in high salinity environments.