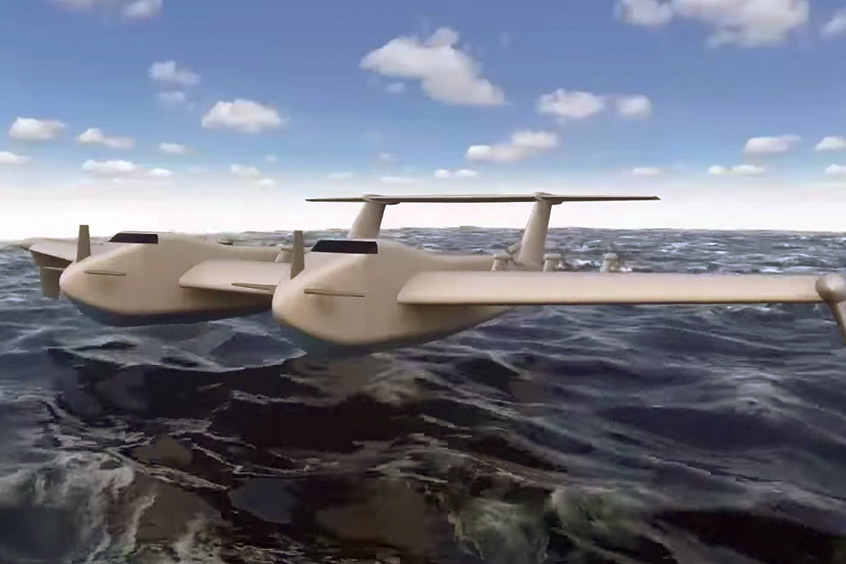 The Liberty Lefter is to operate at sea for weeks at a time without land-based maintenance activities.

The US Defense Advanced Research Projects Agency (DARPA) has launched the Liberty Lifter project to demonstrate a leap in operational logistics capabilities by designing, building, and flying a long-range, low-cost X-plane capable of seaborne strategic and tactical lift. The new vehicle concept seeks to expand upon existing cargo aircraft by proving revolutionary heavy air lift abilities from the sea.

The envisioned plane will combine fast and flexible strategic lift of very large, heavy loads with the ability to take off/land in water. Its structure will enable both highly controlled flight close to turbulent water surfaces and sustained flight at mid-altitudes. In addition, the plane will be built with a low-cost design and construction philosophy.

Although current sealift is very efficient in transporting large amounts of payload, it is vulnerable to threats, requires functional ports, and results in long transit times. Traditional airlift is much faster, but has limited ability to support maritime operations. Additionally, today, such aircraft suffer payload limitations or require long runways.

There is a history of attempting to develop aircraft created to fly with “wing-in-ground effect,” which means the aircraft is flying no more than the length of its wingspan above ground or water. The most well-known examples are the Soviet “ekranoplans.” These vehicles were high speed and runway-independent, but were restricted to calm waters and had limited maneuverability.

To address the shortcomings of existing vehicles and operational concepts, the Liberty Lifter program focuses on addressing three main challenges.

Extended Maritime Operations: Emphasis will be placed on operating in turbulent sea states by creating high-lift abilities at low speeds to reduce wave impact load during takeoff/landing, and innovative design solutions to absorb wave forces. In addition, the project will address risks of vehicle collision during high-speed operation in congested environments. Finally, the aim is for the vehicle to operate at sea for weeks at a time without land-based maintenance activities.

Full-Scale Affordable Production: Construction will prioritize low-cost, easy-to-fabricate designs over exquisite, low-weight concepts. Materials should be more affordable than those in traditional aircraft manufacturing and available to be purchased in large quantities.

Complex Flight and Sea Surface Controls: Advanced sensors and control schemes will be developed to avoid large waves and to handle aero/hydro-dynamic interactions during takeoff/landing.