Navigate directly to favourite company, aircraft and sector pages with our tracker feature.
First public showing reveals Kodiak 900 enhancements
The airframe has been re-engineered to reduce drag, with such changes as replacing the external pilot entry step with a foldable ladder, and adding flaptrack covers on the wing and wheel fairings to the landing gear. 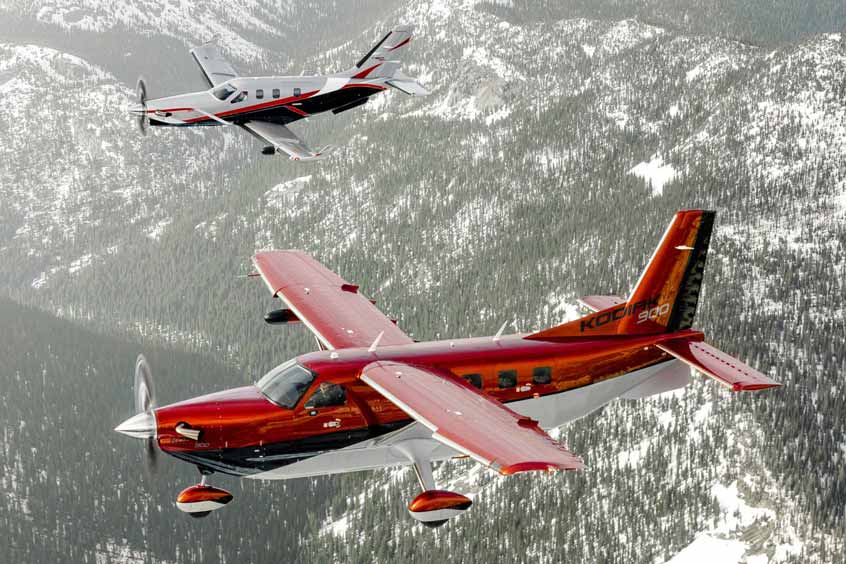 The Kodiak 900 is shown in flight with Daher’s latest version of its TBM very fast turboprop aircraft – the TBM 960. 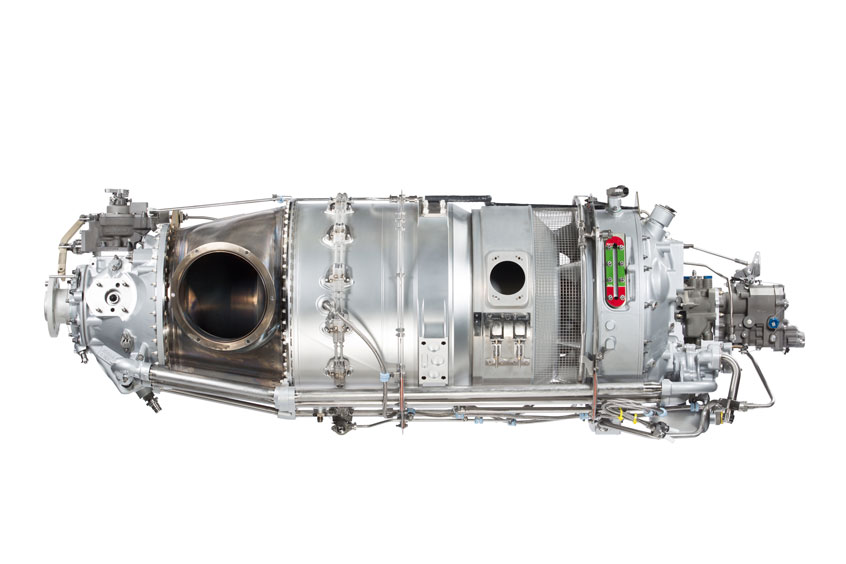 The Kodiak 900 made its world debut at AirVenture Oshkosh with Daher's introduction of this larger, faster version of the robust and rugged Kodiak 100. It features a fuselage length extension of 3.9 feet to provide more passenger room and cargo space, a cruise speed increase to 210 KTAS, and a greater useful load while offering a maximum range of 1,129 nm. The Kodiak 900's operating economics have also been improved, with a nine per cent reduction in specific fuel consumption.

The Kodiak 900 was certified by the U.S. Federal Aviation Administration on July 20, and deliveries will begin in 2023. Production of the Kodiak 900, along with the Kodiak 100 in its latest Series III version, is performed at the Sandpoint, Idaho facility of Daher's Aircraft Division.

The Kodiak 900's stretched fuselage provides a total cabin volume increase of 20 per cent to 309 cubic feet, and it features an all-new interior that couples Daher's expertise in creating refined, luxurious interiors for the TBM aircraft family with the Kodiaks rugged heritage to create an cabin that is versatile and well-appointed.

With the new Summit+ passenger seats that are multi-directional, the Kodiak 900 responds to a wide array of user requirements and mission profiles. The interior can be arranged in multiple configurations, from a double club layout to all-forward-facing arrangement. The Summit+ seats, which also are being used in the Kodiak 100's upgraded interior, can be removed entirely for maximum space and payload. Individual amenity panels that include USB-a and USB-c ports, LEMO airplane-powered headset jacks, cupholders and phone holders are now at every seat.

The new seats come with quick-release handles that allow them to easily slide in the seat-tracks or be removed entirely by one person without the need for tools or specialized equipment. Each seat reclines and has two armrests and a headrest with bolstering and padding, ensuring comfort on even the longest-range trips.

The cabin retains the Kodiak 100's versatility. Ample cargo tie downs throughout enable maximum flexibility for securing down just about anything. Cargo carrying capability and three entry/exit doors enable the entire cabin to be used for cargo, if needed.

A new colour pallet has been introduced for the Kodiak 900's standard interior. The seats come in black, while durable and weather-resistant black carpeting is installed throughout. The sidewalls, headliner and rear bulkhead utilise the popular composite material from the Kodiak 100. Sound damping has been incorporated to the Kodiak 900's unpressurised interior, creating one of the quietest cabin experiences for an aircraft in its class.

One of the most apparent differences in the Kodiak 900's airframe is the addition of a fifth set of passenger windows, which adds to the brightness and the feeling of spaciousness.

The airframe has been re-engineered to maintain the Kodiak's high robustness, and refinements have been introduced in a major effort to reduce drag, with such changes as replacing the external pilot entry step with a foldable ladder, as well as adding flaptrack covers on the wing and wheel fairings to the landing gear. A significant internal airflow “clean up” was performed as well, with the ducts, inlets, and air intakes redesigned, modeled and engineered for low drag.

The use of wheel fairings is another of the Kodiak 900's noticeable visual differences. They have been certified as “secondary structures,” built to strict FAA standards and subjected to the same rigorous analysis and testing for such components as the cargo pod. Their robust build quality ensures the wheel fairings can withstand off-pavement landings, and the main gear wheel fairing can be used as a step for pre-flight operations or single-point refueling. Access doors make the tires' valve stem easily accessible, avoiding the need to remove the wheel fairings for general inspection or minor maintenance of the brakes and tires.

Removal and reinstallation of the wheel fairings is a pilot-maintenance function, ensuring that owners and operators can easily handle them without a maintenance logbook entry.

As the Kodiak 900 sits higher in the rear than the Kodiak 100, a complete redesign of the rear main cargo door was made. The integration of additional steps create an easier entry and exit point for passengers, while also facilitating the loading of payloads. There is an added handhold to assist with the added height of the plane on entry/exit. The door retains the Kodiak's unique clamshell design with fold-flat capability, allowing for easy loading/unloading of large bulk items, pallets, or stretchers for medevac customers.

The Kodiak 900 is powered by Pratt and Whitney Canada's 900-shaft horsepower PT6A-140A turboprop engine, which is tailored for the utility aircraft market and optimized for rugged, demanding conditions. Its all-aluminum gearbox housings have better corrosion resistance, and the engine delivers the best “hot and high” performance in its class. The PT6A-140 series has logged more than two million hours of flight.

There are no cycle limits on the engine's time between overhaul (TBO), something very important in missions that frequently takeoff and land, and fleet operators can benefit from TBO extension options of up to 8,000 hours. The PT6A-140A engine has a minimum component life limit over 50 % higher than other engines in the same class.

“We have a long-term working relationship with Daher and have collaborated with the company closely over the years,” says Nicholas Kanellias, vice president, General Aviation, Pratt and Whitney Canada. “We share the determination within Kodiak and the entire Daher group to build a more sustainable aviation industry and the 9% specific fuel consumption reduction is a major step forward. We also use the latest manufacturing processes, green materials and employ combustion systems that reduce emissions.”

A new constant speed, full-feathering and hydraulically-actuated five-blade composite propeller from Hartzell is used on the Kodiak 900. Its design and low 1,900 rpm setting contribute to the low noise level of 79.5 dB, allowing the aircraft to operate in the most strictly regulated noise sensitive areas.

In the Kodiak 900's engine bay, many components have re-engineered to maintain key features of the Kodiak 100 version. The air-intake system has been optimized for low starting temperatures that allow for multiple battery engine starts per hour, a requirement for such high-cycle customers as skydive operators and in short-haul commercial flights. New additive manufacturing processes (3D printing) are applied in producing the alternator cooling shroud and some of the cowl exit ducts, reducing complexity and weight.

In ISR (intelligence, surveillance and reconnaissance) operations, the Kodiak 900's 300-amp starter/generator and 60-amp alternator meet high-demand electrical needs for mission systems, and the aircraft is easily adaptable to state-of-the-art equipment. It can carry a full team of specialists with the low vibration levels of a turboprop aircraft.

The Kodiak 100's proven capabilities in the firefighting support role are further improved with the Kodiak 900's ability to climb more rapidly and fly faster. It also retains the Kodiak 100's STOL characteristics for delivering crews and supplies to off-airport strips. For law enforcement, public safety and agency operations, the Kodiak 900's multi-mission capability is enhanced with its increased cabin volume and convertible interior. In the air ambulance/MEDEVAC role, the larger cabin accommodates two stretchers, and its increased speed is vital when time is of the essence.

Development of the Kodiak 900 began in 2016. Three test aircraft have been built to date: a static test article for structural testing, a flying prototype for flight testing, and the first conforming production aircraft for FAA function and reliability testing. Maiden flight of the Kodiak 900 occurred on February 28, 2020. The test program has accumulated over 600 hours of flight testing and 800-plus hours of ground runtime across the test fleet.