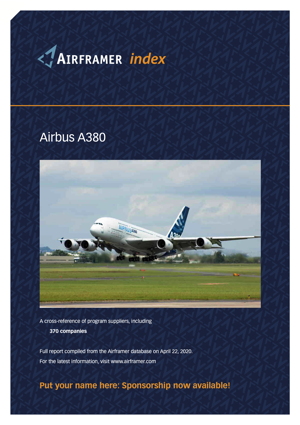 Subscribers can download an Index PDF report about the Airbus A380. It includes contact details for suppliers, with cross-references by category and country, and is updated every day!
If you are a subscriber, then please log in to access your copy of the report. If not, then why not take advantage of our cost-effective subscription rates...

High capacity airliner, comprising an oval fuselage with three decks: Cargo containers on the lower deck, passenger seats typically 10-abreast on the main deck and 8-abreast on the upper.

Carbon, glass and quartz reinforced plastic used extensively, and glass laminate aluminium reinforced epoxy (GLARE), which is a laminate of thin layers of aluminium and S-2 glass-fibre pre-preg, bonded together with epoxy. Three-section flaps and ailerons on each wing, plus eight spoilers.

Flight crew of two located on intermediate mezzanine deck accessed from the main deck. Certificated for 853 passengers, but airline configurations are mainly between 407 and 538.

View full news archive for the Airbus A380.

(612 links)
Expand/Collapse All
Why is the data in this section obscured?