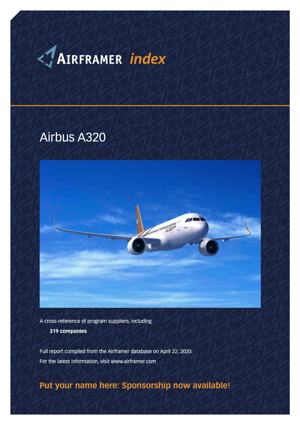 Subscribers can download an Index PDF report about the Airbus A320. It includes contact details for suppliers, with cross-references by category and country, and is updated every day!
If you are a subscriber, then please log in to access your copy of the report. If not, then why not take advantage of our cost-effective subscription rates...

The AlbatrossOne is a small-scale remote controlled demonstrator based on the A321, with freely flapping wingtips to reduce drag and turbulence.

View full news archive for the Airbus A320.

(585 links)
Expand/Collapse All
Why is the data in this section obscured?